It's amazing the lengths to which some people will go to marry well—"well," of course, being an absolutely subjective term. One needs only to look at the latest reality show debacle to realize this. But two turns of the century ago in London, the quest for a suitable suitor was more than a matter of TV fodder, tax breaks, and finally being able to get nagging family members off your back. Back then, at least in author William Makepeace Thackeray's version of this time and place in history, marrying well was an art. And in his 700-page novel Vanity Fair, on which this Mira Nair (Monsoon Wedding) production is somewhat loosely based, Thackeray deconstructs and pokes fun at this process.

His main subjects are Amelia (Romola Garai), a young woman who's well-bred, fiercely loyal, but not always altogether wise, and Becky (Reese Witherspoon), her finishing school friend who's an orphan of dubious parentage and shameless social-climbing prowess. At least she's a shameless social climber in Thackeray's version of Vanity Fair. Witherspoon's version of Becky is less conniving and more compelling, with her kind gestures and winning, blue-eyed enthusiasm about the world around her. What Witherspoon did for dumb blondes in Legally Blonde, she does here for social climbers.

Near the beginning of the movie, these two young women are turned loose from Miss Pinkerton's Academy, where Amelia found love and support and Becky found unending chores and class-based disdain. Though they travel far and wide from this little institution, their reception wavers little. These friends first spend time with Amelia's family, where Becky sets her sights on Amelia's brother, Jos (Tony Maudsley), as a potential husband and a step up to a high rung ... 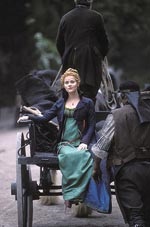