Pop culture analyst Craig Detweiler says Christians are long past merely trying to get a foot in the door in the film industry. Now that they've got a seat at the table, where do they go from here?
by Jeffrey Overstreet |December 27, 2005

In the ranks of Christians making a difference in Hollywood, Craig Detweiler may be well on his way to a "lifetime achievement award." And he's just getting started. 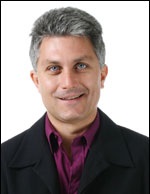 Chair of Biola University's Mass Communications Department, Detweiler is also a screenwriter (Extreme Days) and an author (A Matrix of Meanings: Finding God in Pop Culture). He knows the many differing ways that Christians have either condemned, engaged with, or transformed an industry known for its spiritual bankruptcy. But he remains enthusiastic about Christians making their way into Hollywood. He loves the movies and their ability to provoke our minds into deeper spiritual inquiries.

Earlier this year, Detweiler hosted Biola's annual Media Conference. The theme: "The Deep End: How to Navigate the Open Waters of Hollywood." Christians in the industry gathered to concentrate their imaginations and efforts for a better future at the movies. At the conference, Detweiler talked to us about the state of Hollywood and movies.

What do you hope young filmmakers get from this conference?

Craig Detweiler: The goals for the conference are to gather all of the collective wisdom from people of faith who have been working in Hollywood, and figure out a way to impart that to the next generation. We're hearing from people who have been running a slow steady race built on excellence, ethics, and integrity—Ralph Winter, Mark Zoradi, Lori McCreary. They got to where they are by being great at what they do.

We called the conference "The Deep End: How to Navigate the Open Waters of Hollywood." One of the operative words there is "open." Ten years ago, people of faith might have been content to figure out how to get a foot in the door in Hollywood. They had adopted a defensive stance: "We're being attacked by the media. How do we defend ourselves? How do we get through a crack in their system?"

Now, the questions and the atmosphere have completely changed. Those waters are open because of Touched by an Angel, Joan of Arcadia, Bruce Almighty, and The Passion of the Christ. Hollywood has seen that there is a massive interest and openness toward spiritual things.

So this year, it could have been called the "Now What?" conference.

Detweiler: If the old temptation was to be defensive and go into retreat, the new temptation might be to be offensive, to be triumphalist, power-grabbing, and greedy. That's a whole different set of questions that we haven't dealt with before. We're basically trying to say, "Before it was all about how to be successful. Now it's about how to deal with that success and the larger, messier questions that often come with that." As St. Teresa said, "More tears come from answered prayers than unanswered prayers."

What kind of a difference can a person of faith make in Hollywood?

Detweiler:Ralph Winter's office has posters for all of his films. They'll have signatures from all of the crew. You'll see the level of appreciation. It's not like, "Ralph, hey, that was fun." It's like, "Ralph, I couldn't have survived without you." "Ralph, you made a difference to me when it mattered." There is a depth of respect engendered from the way he has carried himself.

It goes far beyond what happens onscreen. Christians are always interested in the output — they're so content-driven that they don't realize it's just as important how you carried yourself getting there. The power is in the interpersonal testimony more than the finished product.

Look at someone like Tom Shadyac. He has such a string of successes, with Ace Ventura, The Nutty Professor, and Liar, Liar, that when it's time for him to cash in those chips, he can propose a film like Bruce Almighty to the studios and they say, "Okay." He's earned that right to be heard. He hasn't put the message first, he's put the studios' interests first. And in that sense, he's been a faithful laborer in the vineyard and earned the right when it comes harvest time.

Scott Derrickson is another example. He writes a film like Urban Legends 2 for the studios. He writes scripts for Bruckheimer, for Scorsese. He did Land of Plenty with Wim Wenders. And he does a good enough job on all of his things that they say, "Okay, now it's your turn. What do you want to do?" [Editor's note: Derrickson directed the new horror film The Exorcism of Emily Rose, which focuses on issues of faith.]

Is this new emphasis on faith and spirituality in film going to go away?

Detweiler: How long will the after-effects of The Passion last? Is it a passing fad? I don't think anybody knows. [But I don't think it will] go away anytime soon.

My hope would be that we could connect people of faith who are storytellers with studios' interest in those stories. In the past, not enough people of faith have even been connected with each other to know how to connect these things. It's a few isolated producers over here, writers over here, agents over here—and none of us knew each other enough because we were so closeted, perhaps.

Somebody told me they auditioned to write for Charmed, and when they were offered the job, they thought, Do I really want to do a show about witches? They turned it down. Now, three years later, they've met two other Christians who also turned it down. So three different Christians were offered the chance to write on the show and none of them knew about each other. They backed off from the show out of fear that they'd be crushed in that atmosphere, when they might have had a strong possibility to deal with some major spiritual themes.

We do not impose that kind of ethical standard on people who make widgets for a living. We don't ask, "Is this a redemptive piece of plumbing?" There may be good faucets and bad faucets, but we don't judge by the quality of company's faucets whether or not their Christian witness is valid. I think it's the same in this case. We urge our students to be as professional as possible in as many professional situations as possible.

It's about an individual's conscience in individual projects. Paul left it suitably messy. He left it very grey.

What do you say to those who still object to being involved in movies that are ethically unsound?

Detweiler: I think it's going to go away. It's an old question, rooted in an old set of assumptions about this world and God's place in it. There's an increasing openness to finding the sacred amidst the profane—or despite the profane. The more that happens to people in their own life, they can no longer put a box around God or around their Christian brothers and sisters.

I think Christians should have a radical rethinking about Paul's discussion of the weaker brother. Essentially I think we've let the weaker brother drive the conversation, when in fact Paul would say, "Hey, weaker brother, don't judge your more mature brother who might do something different."

What films do you recommend to Christian filmmakers to watch and learn?

Detweiler: In my first class at Biola, I asked students what films most impacted them. They listed American History X, Magnolia, Donnie Darko, American Beauty, Run Lola Run, and Requiem for a Dream. I said, "What do these films have in common?" Well, they're all R-rated. But then I asked them to look closer, and they said, "All of them deal with life's ultimate questions. They deal with the messiness of life. They offer the idea of transcendent hope that lies beyond ourselves."

What films have had the biggest influence on you?

Detweiler [laughing]:American History X, Donnie Darko, American Beauty, and Requiem for a Dream! Honestly, I think it's the same for my students and myself, which is why I'm in the right place. I consider myself the world's oldest Gen-Xer. I may have grey hair, kids, but I'm in your wheelhouse. But the films that got me the first time around were the great films of the '70s: Apocalypse Now, Taxi Driver, Raging Bull, Badlands, Days of Heaven.

You're not one of those Christians who embrace only family-friendly or "evangelistic" films. But then, you're not a film prof who ignores the multiplex and sits around quoting Robert Bresson and Andre Bazin's philosophies of art. Why do you focus so heavily on popular cinema?

Detweiler: We're dealing with a larger American question about cinema as an art form: "What are movies for?" The American answer is that movies are for entertainment.

True, the enigmatic is not too popular. But the first thing I did when I came to Biola was invite Scott Derrickson to teach a class on European cinema history, covering the films of Tarkovsky, Bresson, and Dreyer. Most of the students said, "How come we've never heard about these people?" But the good news is that those films and filmmakers are so timeless that I don't think we have to worry about it right now.

We could say, why does Michael Bay [director of Armageddon and The Island] have the audience he does, when Terrence Malick [director of Badlands, Days of Heaven, The Thin Red Line] gets a much smaller audience? I don't think we need to sweat it. Whose films are going to endure? I'm putting my money on Malick.

Hopefully good, beautiful, complex, and redemptive Christian art will stand the test of time, and we don't need to worry about the whims and fashions of the era.

Do you see "good, beautiful, complex, redemptive" films being made today?

Detweiler: Almost every class I teach here ends with David Gordon Green's film George Washington, which came out in 2000. It asks, "What is possible?" It dares to suggest that there could be a new George Washington born as a poor black kid in the southern United States, faced with an epic crisis as a young man—his own cherry tree—and rises to the occasion and becomes part of that great tradition of Georges, from George Washington all the way up to George Washington Carver to Geronimo to George Bush. He's the next in line.

I end my classes with George Washington because of the profound hope in it. Here is one of the youngest filmmakers with one of the purest artistic visions, and [his movies are] already in the Criterion Collection. It doesn't matter if nobody's seen or heard it. It will stand the test of time, whether people discover it this year, in ten years, or in a hundred years—it doesn't matter. It's going to last.

What lessons would you most like to see Christian filmmakers learn?

Looking back at 2005, those who measure a film's importance by its box office success will point to the final Star Wars saga, Revenge of the Sith. How important is that film to you and your students?

Detweiler: I wish I did care. I'm sad to say I don't. And I think my students don't care. Hard to believe.

Tags:
None
Posted:
December 27, 2005
More From: by Jeffrey Overstreet