Because of Winn-Dixie is quite possibly the best movie yet from Walden Media, the company created by Christian billionaire Philip Anschutz for the express purpose of making film adaptations of acclaimed children's books like Holes and I Am David. And while the world waits with breathless anticipation to see how Walden's upcoming adaptation of The Lion, the Witch and the Wardrobe turns out, Because of Winn-Dixie may be their most "Christian" effort to date. 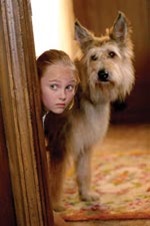 Based on a Newbery Honor-winning book by Kate DiCamillo, the film concerns a girl who has just moved to a small Florida town with her preacher father, and the stray dog the girl picks up at a Winn-Dixie grocery store—hence the dog's name. The dog is filthy and unkempt, and what's more, he has a knack for throwing things into disarray. But Opal (newcomer AnnaSophia Robb) persuades her father, whom she refers to as "the Preacher" (Jeff Daniels), to take the dog into their trailer.

At first the girl and the mutt are just two lonely individuals who have only each other for companionship, but it isn't long before Winn-Dixie is dragging Opal from one new and unexpected destination to another, inadvertently introducing her to new friends of all ages. First, they visit a pet store manned by a guitar-playing drifter named Otis (Dave Matthews). Otis refuses to deal with Opal and her furry friend at first, but when he asserts that the store's resident parrot hates dogs, the bird proves him wrong by coming to rest on Winn-Dixie's head—so Otis relents.

Opal and Winn-Dixie get in a bit of reading

Images like these make it tempting to think of Winn-Dixie as a Christ figure, not unlike his canine compatriot in My Dog Skip; in an earlier scene, Opal had given Winn-Dixie a thorough washing in an inflatable swimming pool, and the winged creature who sits on his head in the pet store bears a striking resemblance to the dove that appeared immediately after Jesus was baptized. Coincidence? Perhaps—but there are other points in the story, too, that seem to be, at the very least, influenced by the narrative thrust of the Gospels.

Which is not to say that Because of Winn-Dixie is a straightforward allegory; it's more complex than that. Winn-Dixie himself is a wounded soul who, it turns out, is scared of lightning storms. When he wakes up in the middle of the night and starts running back and forth in the trailer, knocking down every object in sight, Opal and her father can only sit and stare; if they let him out of the trailer, he might run out into the storm and become lost again. Sometimes bearing someone else's burden may mean sitting back and letting them trash the place.

More broadly, Winn-Dixie can be seen as a mischievous agent of grace who brings the unpredictable into people's lives yet also helps to bring those people together into a sense of community in which there is neither male nor female, black nor white, young nor old. Annoyed by the other children at church, Opal prefers to become friends with the local grown-ups, and so she hangs out with Miss Franny (Eva Marie Saint), a spinster librarian who clings to the legacy of her Civil War ancestor, and the partially blind Gloria Dump (Cicely Tyson), whose own troubled past helps Opal come to terms with her absent mother. And gradually, through these friendships, Opal is encouraged to see the good in those her own age, too.

So far, so true to the book. But first-time screenwriter Joan Singleton doesn't quite trust the story to work on its own uplifting terms, so she introduces a couple other characters to provide the film with a greater sense of conflict. Thankfully, the subplot involving a surly landlord (B.J. Hopper), who demands that Winn-Dixie be sent to the pound, is resolved in an amusingly satisfying way; but the other subplot, involving a pigheaded police officer (Harland Williams) who harasses Otis for no good reason, goes nowhere. True, it is fun to watch Otis's animals strike back at the cop, but the fact that he is never brought into Opal's little "community" puts a limit on the story's generous spirit—a limit that was not there in the book.

Even so, this is a sweet film, laced with magic realism—especially where Otis's pacifying effect on the animals, or Miss Franny's stash of sorrow-inducing lozenges, are concerned—and it tackles some rather dark themes in a way that is perfectly appropriate for young children. Director Wayne Wang (Smoke) may be new to the family genre, but he knows how to create empathy for his characters, and he has a stunning new star in Robb. This is the sort of role that might have gone to Dakota Fanning (whose kid sister Elle has a small part here), before she moved to the big leagues, but Robb has a bright charisma all her own.

Because of Winn-Dixie is rated PG for thematic elements and brief mild language. Characters discuss alcoholism, divorce, war and the troubles they have had with the law, but in a way that children, like Opal, can deal with it on their own level. There are also the obligatory scenes of an animal belching and a man stepping in dog poop.

Kate DiCamillo is becoming one of the most celebrated authors of children's literature working today. Her latest work, The Tale of Despereaux—an enchanting, delightful fairy tale about a mouse, a rat, and a princess—is being adapted by the animators who gave us The Triplets of Belleville. But currently, director Wayne Wang's adaptation of her Newberry award-winning novel Because of Winn-Dixie has Christian film critics cheering—not just for the story, but also for the performance of newcomer AnnaSophia Robb.

Peter T. Chattaway (Christianity Today Movies) raves, "Because of Winn-Dixie is quite possibly the best movie yet from Walden Media, the company created by Christian billionaire Philip Anschutz for the express purpose of making film adaptations of acclaimed children's books like Holes and I Am David. And while the world waits with breathless anticipation to see how Walden's upcoming adaptation of The Lion, the Witch and the Wardrobe turns out, Because of Winn-Dixie may be their most 'Christian' effort to date."

Chattaway goes on to detail several points that "seem to be, at the very least, influenced by the narrative thrust of the Gospels." And he concludes, "Wang may be new to the family genre, but he knows how to create empathy for his characters, and he has a stunning new star in Robb."

Michael Elliott (Movie Parables) says, "Wang captures the small Southern town feel of the book giving life to the quirky characters and setting a general air of nostalgia over the production. Best of all, Wang and screenwriter Joan Singleton avoid the obvious pitfall of most dog movies by not making the dog smarter or wiser than any animal has ever been. Winn Dixie is simply a dog doing the things that dogs do … which is why we love them."

Steven D. Greydanus (Decent Films) says it's "a good family film frequently verging on being an excellent one, and is quite a bit better than the dog-movie clichés the trailers suggest. [It] addresses some tough themes, including broken families and alcoholism, in a way that is accessible to children and never inappropriate even for the youngest. Although the film is seldom preachy, its themes of community and healing are framed in a Christian cultural milieu defined above all by the Preacher, a rare sympathetic clergyman. Winn-Dixie is both sweet and sad, a blend that does the heart good."

Rhonda Handlon (Plugged In) calls the book "one of the most enjoyable reads I can remember in a long time. The film stays pretty true to its source, although some creative license was taken to flesh out the small book into a full-length cinematic feature. Winn-Dixie . . . is the enduring story of mankind's need for unconditional love, a need both created and fulfilled by God. While Winn-Dixie is fictional, in real life it would be just like our Creator to answer the prayers of a lonely little girl in need of a friend by providing her a dog that needed a home."

Gene Edward Veith (World) says, "Because of Winn-Dixie is a good movie: good as entertainment, good for the whole family, good artistically. It is also morally good, even spiritually good. Not many movies are as satisfying in all of these ways."

Frederica Matthewes-Green (National Review) says, "The film has surprising charm, and yields some unexpected insights. While the prime audience will always be kids and their tag-along grownups (an audience that will find this film more than satisfying), the occasional grumpy outsider who wanders in will also find plenty to enjoy."

Nate Dickerson (Relevant) says, "Some family films should never be made (or even thought of). Others can be extremely poignant and touching. For Because of Winn-Dixie, the latter applies."

Harry Forbes (Catholic News Service) says, "The film has several wise messages, including 'Love what you've got while you've got it' and 'Embrace both sadness and joy.' The film has a sentimentality that comes out of basically good people acting decently, and a few corny—or awkwardly contrived—lines notwithstanding, avoids being mushy. In fact, the occasional contrivance (perhaps derived from the book) in Joan Singleton's script stands out in a film where, basically, the emotions are so true. Any adult avoiding the film because it would seem to be a kids' movie about a girl and her dog will be missing a richly satisfying experience in its poignant story."

Steve Beard (Thunderstruck) concludes, "While Because of Winn-Dixie is not meant to be a religious movie, it deals respectfully and humorously with the struggles and frustrations of church life."

David Bruce (Hollywood Jesus) says that the title character, a scrappy little hound named Winn-Dixie, "presents the way God works: through the unexpected and ordinary events in life. I really appreciated [the film's] ending. As in real life, not all things can be resolved. But, it is all part of the life journey of faith."

A ready-to-download Movie Discussion Guide related to this movie is available at ChristianityTodayMoviesStore.com.