So says Michael Landon Jr. about his famous father, in whose footsteps he's following in many ways by making family-friendly fare. But he's also determined to avoid repeating his father's sins.
Mark Moring |February 22, 2005

In many ways, Michael Landon Jr. is following in his famous father's footsteps. He's directing family-friendly TV fare about pioneer life (sometimes even on a prairie!), including his latest film, Love's Enduring Promise, a smash hit on the Hallmark Channel which comes out on video today. It's the follow-up to another Hallmark hit, Love Comes Softly, and the second film based on the popular series of Christian novels by Janette Oke. Both films are warm and filled with life and light, and Landon will be making at least two more movies in the series—to first air on Hallmark, and to be later released to video. 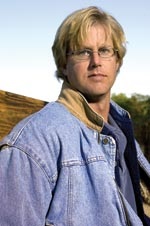 But in other ways, Michael Landon Jr., 40, is nothing like his father. Sure, the elder Landon, who died of cancer in 1991, played characters that American TV audiences grew to know and love—Little Joe on Bonanza, Pa Ingalls on Little House on the Prairie, and the angel Jonathan Smith on Highway to Heaven. But away from those impeccable characters, Landon wasn't always the consummate role model. He had an affair with a make-up artist on the set of Little House, which led to a divorce that devastated his wife and his kids—including Michael Jr. The younger Landon, who had worshiped his father, was 15 when this happened. He then went into an emotional and rebellious tailspin for the next four years before becoming a Christian and turning things around.

Today, Michael Landon Jr. is, in many ways, continuing his dad's legacy of being a part of wholesome entertainment. But, married for 18 years and the father of three, he's also bound and determined not to repeat his father's sins. We talked to the younger Landon about his dad, his commitment to his family, and what he's hoping to accomplish with the Love Comes Softly movies.

You've done two films now in the Love Comes Softly series. What attracted you to these stories?

Michael Landon Jr.:Book one was given to me a little over ten years ago. I had a passion for the genre—that 1850s pioneer era—through my father. Little House on the Prairie was by far my favorite of my father's work. The other part of my attraction was Janette's ease of naturally intertwining faith elements into the stories, and another thing that really drew me was Clark's character. He embodied everything I would like to be as a father and husband. It's rare in the movies these days to find a male role model who actually prays to God and lives out his faith. 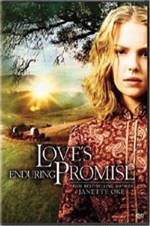 Now the sequel is out. How would you describe the story of Love's Enduring Promise?

Landon: It is the continuation of Love Comes Softly, centering around Missie ten years later. She's now 18, and this is her love story.

You like the fact faith comes through subtly in these stories, instead of in your face. Why is that important to you?

Landon: In the Christian filmmaking community, sometimes I feel like there's too much manipulation in trying to get their faith element across; sometimes it's a little too heavy handed. I just think if you allow your characters to live out their faith in their lives, that speaks for itself.

Are you planning to do all eight books in the series?

Landon: We're doing two more this spring and summer, shooting them back-to-back. All eight? Hallmark wants to wait and see. If it continues to do well, I think we might finish off all eight.

Was there ever any talk of trying to get these into theaters?

Landon: Not really. It would be a very tough sell. The material lends itself more towards television. 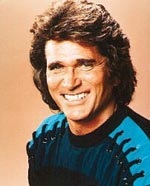 Let's talk about your dad. How would you describe your relationship with him through the years?

Landon: He was my everything as I was growing up. Then when my dad ended up having an affair and divorcing my mom when I was 15, my world was completely shattered.

Did you see it coming?

Landon: No. My parents never fought in front of us. But looking back, I think I knew there was something going on—telltale signs, some attitudes and things that were not the norm. I should've picked up on that, but I had a certain vision of my father—a vision I think was perpetuated by the role he was playing at the time [on Little House] and by the way the public perceived him. He was the perfect dad.

Anyway, I got blindsided. I came home from school one day. My uncle was there with red eyes. And he sat my sister Leslie and I down and said, "Your dad has left. Your mother is upstairs. She's a wreck, and she needs you to comfort her." And that's when it all crumpled.

And it started with an affair he had with someone associated with Little House?

Landon: That's correct. On the set.

You explored these issues in the 1999 movie you made about your dad, right? 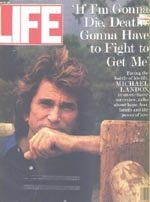 Landon: I did. The movie was centered around the divorce, and that was my main reason for making the film. I basically used the guidelines my father had set in his Life magazine article, the last interview he gave before he died. The movie put things in perspective from my point of view—the affair, his drinking, everything in the Life article. I went by the parameters set by my father in that article, and I was not going to disrespect those parameters. The only difference was that it was exploring what I was going through, and my brothers and sisters were going through.

Do you think the public remembers your dad as Little Joe and Pa and the angel on Highway to Heaven, as the ultimate good guy? Or do they remember the difficult side of your dad?

Landon: It depends on whether or not they were following that part of his life. If they were the hardcore fans and they stayed away from the reports or considered them lies, then that's probably how they see him—as those characters he played. But if they followed any of the stuff that went on, and if they read the Life magazine article, they would see the truth. I never want to negate from the work that he did, because I'm very proud of that work. But there is a very painful reality to the private, the real side of his life that we experience. I don't care if you're Michael Landon or the next-door neighbor—divorce, man, is brutal, absolutely brutal, especially when it's thrown away via an affair.

How have your father's failures on that front affected you as a husband and a dad?

Landon: I think the main thing is remembering the pain I went through. Otherwise I think people would be divorcing left and right. I am extremely protective of my marriage, and I create boundaries for myself with other women that won't allow any of that side to ever happen. We're going on 18 years of marriage, and I've been faithful to my wife. I see my three children and know that the last thing I'd ever want to do to them is be unfaithful to my wife, not only for her sake, but for their sake, for my sake and for my testimony. I refuse to ruin my testimony. So it's a combination of all those things—honoring God and wanting to run the rest of this race as best as I possibly can.

How old are your kids?

Landon: My daughters Ashley and Brittany are 13 and 10. And my son Austin is 6.

I understand your dad grew up in a home with a Jewish dad and a Catholic mom. Where did he end up landing, faith-wise?

Landon: He kind of landed outside of any organized faith. He had a belief in God, but that was the extent of it. The only church upbringing my sister and I had was going to church every once in a while with my grandparents.

So how did you end up becoming a guy of faith?

Landon: After my father left, I went through a few really tough years. I went from being an honor roll student to just barely getting by. I started experimenting with pot and alcohol. All these things came into my life and started to destroy it.

My mom's world was torn apart too, and she needed help. She started opening up to her manicurist, a woman named Louise. Louise gave her some great wisdom to work off of, and that's when she found out that Louise was a Christian. And then Louise took her to church, and then my mother got saved.

How old were you at that time?

And you were still raising hell?

Landon: I was absolutely raising hell. I was at USC at the time, and my mom started asking me if I wanted to go to church with her. I didn't want to have anything to do with it. And then finally just to get her off my back, I went. I couldn't tell you what the pastor was talking about that day, but it impacted me. But then I didn't go back. I fought it. I got kicked out of USC, because of my academics. I didn't bother going to class. It was that bad. So I finally went back to church again, resisted, went back again, resisted. And then I finally stopped fighting and gave my life to Christ, just before I turned 19.

Fast forward to today. How does your faith inform your filmmaking?

I also hear you're very passionate about what your children are exposed to in entertainment.

With TV? What's right about TV, and what's wrong with it?

Landon: I think one of the biggest mistakes we've ever made is putting the rating system on TV, because it's opened up the doors to whatever they want to do—they just have to warn the viewers beforehand. So now it's a joke. All the stations can act as if they were HBO. There's this thing of going to the lowest common denominator of human nature. It's very rare with you find something uplifting or inspiring. The commercials are almost more offensive now than the actual shows. It doesn't matter what you're watching. You could be watching football, and you're scrambling to grab the remote control because some commercial is so salacious.

Landon: There are some shows that are OK, but it's pretty limited. There isn't anything we watch regularly. The kids love SpongeBob, but there isn't really one show we can't wait to sit down and watch.

What are some good examples of recent movies that you're applauding?

Landon: Anything the Pixar boys do. They're my heroes. They are just amazing storytellers that captivate, grab the imagination of adults and children.