Suicide is not uncommon. Every year in the United States, about 734,000 people try to take their own lives. Approximately 30,000 succeed, creating about 350,000 suicide survivors. That's enough tragedy to touch nearly everyone at some point in their life. Yet, the aftermath of suicide is not frequently discussed, and those who suddenly find themselves mourning a loved one have few resources to help them navigate the experience.

Fierce Goodbye, a documentary produced by Mennonite Media, is one of those rare resources. The program is hosted by Judy Collins, the folk singer whose 1970 album Whales and Nightingales made Amazing Grace famous outside the church.

What qualifies Collins for this task is not her vocal career, but her personal experience. In 1992, Collins' only son, 33-year-old Clark, committed suicide. Collins also once attempted suicide, making her doubly a survivor. Her book Sanity and Grace addresses her spiritual journey following Clark's death. 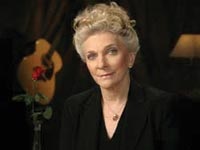 Folk singer Judy Collins, who lost a son to suicide, hosts the program

Fierce Goodbye is not only for family members. It is also for pastors and seminarians, friends and fellow church members—anyone who has to relate to those left behind.

The 42-minute documentary introduces five families and their stories. We listen to parents and siblings and in-laws and clergy talk about how they dealt with the uniquely painful grief associated with the suicide of a loved one. But that short program only begins to suggest the themes and questions that permeate the grief that follows a suicide.

How can I talk about my loss? Do I dare? Would anyone understand? Would my loved one still be alive if only I had done something different? Where is he or she now? Are they eternally lost, or does God's love somehow reach them even in this darkest of moments?

Fierce Goodbye takes seriously the religious context of many suicide survivors, and gives glimpses of how these families and their churches came to deal with the faith questions. The participants come from a variety of religious backgrounds, including hints of Baptist, Catholic, Mennonite, Presbyterian, Orthodox, and Jewish backgrounds and beliefs.

Video is an excellent medium for helping you feel a connection to someone else's experience. It is a relatively poor medium for conveying information or for exploring ideas. Nevertheless, the religious questions are helpfully dealt with in the DVD's bonus materials.

From Dr. G. Lloyd Carr, professor emeritus of biblical and theological studies at Gordon College, we learn that the Bible nowhere condemns a suicide. Those who take their lives may be condemned for some other sin (such as Judas's archetypal betrayal), but not for the suicide itself. 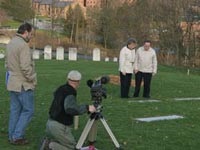 The filmmakers videotape one family at the cemetary

According to Carr, the earliest theologian to condemn suicide itself was Augustine of Hippo (A.D. 354-430). It seems that his mentor Ambrose of Milan had praised as martyrs Christian women who took their own lives rather than allow pagan men to rob them of their virtue. Augustine didn't buy Ambrose's line of thought and began to teach that suicide was self-murder, and there could be no forgiveness for that murder since the suicide had no opportunity for repentance.

That teaching has been dominant in the Christian church until the twentieth century. The modern understanding of mental illness has seriously modified the way many pastors and theologians treat the subject of suicide. Suicide is often linked with serious depression, and many say that the diminished capacity that is a symptom of such mental illness means we should think of such deaths as the result of disease rather than wickedness.

Orthodox theologian Stanley Harakas relates the clear teaching of the church: life is a gift from God and it is a sin to usurp God's authority over our lives. Anyone who takes his own life out of a philosophy that asserts human authority over divine right is committing a serious sin. But, says Harakas, the church understands the diminished moral capacity of those with mental illness, and if a physician certifies that the one who committed suicide was suffering from such an illness, an Orthodox bishop will usually give a pastor permission to give the person a Christian burial.

Rabbi Marcia Zimmerman gives a parallel account from a Jewish perspective. The Jewish community reveres the 960 suicide-martyrs of Masada (just as Ambrose revered the virgin suicides). But Judaism's fundamental value is expressed in the command: "Choose life." Thus our lives are not our own to take. Rabbi Daniel Roberts contrasts the high value that Jewish religion puts on life with the religion of Egypt, which focused on death and the afterlife. Rabbi Zimmerman explains the pastoral loophole in the law: In many Orthodox Jewish communities today, there is a presumption that anyone who tries to commit suicide immediately regrets his action and wills to live. Thus, it is the drugs or the noose that causes death, but it is not technically suicide. When Jewish communities give their suicides this benefit of the doubt, they are then free to give them a proper Jewish burial.

All the clergy interviewed stress the wrongness of taking one's own life, while stressing the all-embracing love of God and the likely diminished capacity of the suicide.

If you are a pastor or counselor or other caregiver, you should watch Fierce Goodbye. But pay special attention to the DVD's bonus materials. Not only are the religious questions dealt with in more depth, but so are the family stories, the process of healing, the importance of support groups, the phenomenon of the keen sense of a person's presence after death. There is even an extended interview with Judy Collins, who resists the too-easy administering of anti-depressants and prefers natural remedies and alternative therapies for depression.

Fierce Goodbye lacks drama (though it opens with a re-enactment of a suicide call to a hotline), though it is rich in pathos. The constantly shifting talking heads make it feel fragmented and desultory. And the medium limits the depth in which any dimension of this difficult topic can be pursued. But because video is such a user-friendly medium, this is a good resource for churches, families, pastors, and seminary classrooms to open the topic and to begin an exploration.

Fierce Goodbye discusses one of the most difficult subjects anyone ever has to deal with: the suicide of a loved one or friend. Children and even teens should probably not watch the video unless they have experienced a suicide in their family or circle of friends. If they have experienced such a loss, it may be healing for them to watch the video and hear from others who have had a similar experience. The documentary is especially helpful for preparing pastors, social workers, counselors, teachers, and others in relational professions.

1 of 3
Folk singer Judy Collins, who lost a son to suicide, hosts the programThe filmmakers videotape one family at the cemetaryProducer Burton Buller goes over script changes with Collins