The appeal of the Everyman is that he can, in theory, be played by Anyman. At least, that's what the producers of The Honeymooners would like us to think, and to a certain extent, they're right. The film is loosely based on the classic 1950s sitcom that starred Jackie Gleason as a bus driver who was always thinking up ridiculous get-rich-quick schemes, and Art Carney as his somewhat dim neighbor who worked in the sewers. The film replaces these blue-collar Irishmen with blue-collar African Americans, and why not? As Ralph Kramden, Cedric the Entertainer has Gleason's heft and his capacity for irritation—though his facial expressions are much more limited, which is a real drawback when he's angry—and as Ed Norton, Mike Epps is as affable and dedicated a foil as Carney ever was.

Times have changed, though, and the new film all but eliminates some things that were acceptable half a century ago while adding other elements that would never have made it past Broadcast Standards. Domestic violence is no longer a fit subject for comedy, so Ralph's flamboyant threats to punch his wife "right in the kisser" or to send her "right to the moon" have been written out of the script or, in the latter case, turned on its head; now, when Ralph first meets and falls in love with Alice (Gabrielle Union), he tells her in a state of romantic optimism, "I'll take you to the moon, Alice." Meanwhile, Ralph's more physical outbursts are all directed at Norton, or reduced to a scene in which Ralph mutters under his breath, to himself, that he would like to take "just one swing" at his mother-in-law.

Meanwhile, the humor relies just a wee bit more on sexual innuendo. Norton, the sewer man, pays an early visit to the Kramdens' apartment to ... 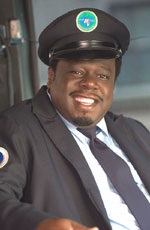