Like many African-American women, I've got an almost religious relationship with my hair appointment. Once every two weeks, I make my pilgrimage to the Crown and Glory Hair Salon, where I sit under the ministry of Cheryl, who's got "growing hands." There, Cheryl and whichever other customers or hairdressers are there serve as surrogate mothers, sisters, counselors, doctors, preachers, sociologists, whatever. And sometime during the evening—maybe while my head is in the sink, under the dryer, being clipped or curled—somebody's going to end up talking about men.

So when I realized I'd double-booked—the press screening for Beauty Shop and my regular hair appointment were on the same day—I thought to myself: This had better be worth it. 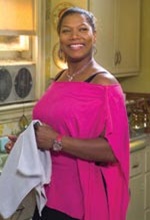 Hairdresser Gina (Queen Latifah), first encountered in Barbershop 2: Back in Business, is the mother of a musically gifted daughter, Vanessa (Paige Hurd). The recently widowed Gina has left her booth at the beauty shop in Chicago and moved to Atlanta so Vanessa can attend a performing arts school. But Vanessa enjoyed sharing music with her father, so the grieving tween's rehearsals feature technical virtuosity, but lack joy.

Meanwhile, Gina is frustrated with her work. She's stuck at a chi-chi salon owned by snobbish Jorge, played with clipped English in a vaguely French/Eastern European accent by a metrosexual Kevin Bacon with highlights. When Gina and Kevin get into yet another argument over her refusal to follow his arbitrary salon hierarchy, she leaves, determined to open her own shop. The story of Gina's struggle to open and maintain her new salon (amidst the jealous Jorge's attempts to thwart her) and Vanessa's rediscovery of her joy in music make up the film. 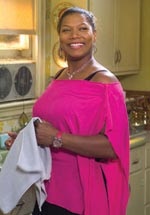