This meta-physical/gothic thriller takes on the themes of life and the afterlife, time travel, and one's ability to change the course of human events. Jack Starks (Adrien Brody) is a Marine in the Gulf War who receives a head wound that almost kills him. The medics are ready to tag and bag him when they notice that there is still some life in him. "That was the first time I died," the voiceover tells us.

Released from the service, Jack wanders the country, hitchhiking and alone. He's not sure who or where he is much of the time, but he's otherwise lucid and quite sane. He's a holy innocent, a simple man without guile who is hampered by an inability to remember clearly. Two events set the course of his life. When he finds a drunken woman and her small daughter in need of assistance, he performs an act of kindness that endears him to the girl. This brief encounter launches one of several intersecting trajectories.

In another hitchhiking encounter, he hooks up with a desperado and ends up taking the fall for a murder. Jack knows he didn't do the killing, but he blacked out during the crime and was found there, unconscious. He has no firm memory of the killing. He's not even aware that the other man was there so he cannot make a case for his innocence. His general disorientation convinces the jury that he is not guilty by reason of insanity and the judge sentences him to a mental facility for the criminally insane.

Dr. Becker (Kristofferson) is the worst kind of antagonist. He's not really out to do harm. He's a mediocre doctor who feels that he is helping his patients by loading them up with drugs, strapping them into a straight jacket, and subjecting them to the most inhumane and low-tech sensory deprivation. He simply files ... 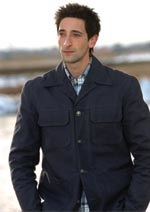