Green Day has been one of the best, and most enduring, mainstream punk rock bands for the last decade, and their most recent CD, American Idiot, recently won the Best Rock Album award at the Grammys. These punkers have sold millions of albums, they've played Woodstock, they've been on the cover of Rolling Stone. They're the picture of success … but where are they spiritually? Author Doug Van Pelt wanted to know, so he got bass player Mike Dirnt on the phone to talk about Jesus. In the following excerpt from an interview that appears in Van Pelt's book, Rock Stars on God: 20 Artists Speak Their Minds About Faith (Relevant Books), Dirnt says he's "down with JC"—but also that he's an "optimistic agnostic." How's that add up? 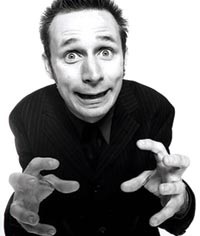 Do you believe in evolution?

Mike Dirnt: Yeah man. You know, when Beck said, "In a time of chimpanzees, I was a monkey," well I was also a monkey. I'm sure of it. I just feel it in my bones."

Is that what you base your belief on?

Dirnt: You know what? I'm an optimistic agnostic. I think the second we die, within a matter of seconds, everybody else arrives, and that's the party, and you live your hell on earth. I don't know.

What do you think of Jesus Christ?

What do you think of his claims to be the Way, the Truth, and the Life, and that "No one comes to the Father but by me"?

Dirnt: Sounds a little mafioso to me. You know, to each their own. Everyone has the right to believe in whatever they believe in. Like I said, I'm an optimist, so I believe in some sort of life after death, I don't know what kind.

Have you ever thought about how there's this guy here, everybody says he was a great teacher and all. He went around saying he's the only way to the Father, and then he died for that statement.

Dirnt: I'm sure that he did. I'm sure that a lot of people have died for that, but I'm sure more people have died arguing over it since then. You know, millions. And when I hear people say that everybody in the world has heard of Jesus Christ, it makes me want to puke, in all honesty. I'm not gonna base my religion, well, I base my religion on my own spirituality, and "what goes around comes around." If there is a God or anything like that, there's nothing I can certainly do about it. I believe we're all part of the Force. It's like the Force. There's Luke, there's Leia, and there's us.

Well, everybody bases their beliefs on something …

Dirnt: "All my religious beliefs are based on Star Wars.

How does all the success feel to you?

Dirnt: It's nice to know that people can get our music, and that people relate to it, and that we can go all over the world and the people that we play to can buy our records. The exciting part to me is when you go somewhere that you've never been before, or you go somewhere that you have been before, and you feel the connection. There's a camaraderie. Everyone's there for the music. I think it's great. I don't stop and look back and lay on my laurels at all. We're all too busy thinking about what's going on in the future. Not the far future, though, mainly today till tonight.

How do you respond to the critics who say, "Green Day isn't punk"?

Dirnt: I agree (laughs). It's kind of an oxymoron to say "punk rock" and "hockey arena" at the same time. We definitely come from a certain element, and we have a certain idea of what we like. We carry our morals, our ideals, our ethics, everything with us from where we come from. But I can't say I am the same person as who I was five years ago. I'd be kidding myself. I think that's the most important thing you can do to be a real person—is to be honest with yourself.

How do you attempt to keep your feet on the ground now that you're kind of riding this crest of popularity? 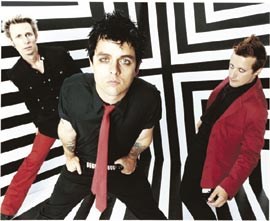 Dirnt: Just don't put yourself on a pedestal and think it's more than it is, because you're here today and gone later today. We don't go out and buy Ferraris and throw the rock 'n' roll lifestyle—not at all. I'm surprised the question isn't, "How can you afford such an exceedingly poor punk lifestyle?" Well, I'll tell you how I do it. I give all my money to my mom. Everybody who buys a record, I send 'em a dollar (laughs). I don't know. We've been weaned into it really well. We'd been going on tour years before we ever got to a major label. So we'll go on tour for months, and we'll come back, and our friends'll give us a head check … . I think that we're pretty firmly grounded in who we are and where we come from. As to where we want to go, well, see ya when we get there.

Well, heading back for the last question, about Star Wars and the Force, what would be your best idea about what kind of force is out there, what kind of supreme being or spiritual world awaits us?

Dirnt: That's a strange thing, because life is so amazing that people will argue. They will argue this and that, or whatever. I think that everything is connected in one way or another. I bet I'm connected to some star that is hundreds and hundreds, and zillions of miles away. If there is a God, it's something I can't even fathom. So, why spend my life trying to understand something that I can't understand? I just take my morals and my scruples out of whatever I have learned in life and just go with that. I don't know. It's got to be something like a force.

What if there was a God? Could you see, like, how someone could be a fanatic, and there really was a God, and you could know of him?

Dirnt: "I had an ex-girlfriend who left me for Jesus. I thought I was gonna marry this girl, a long time ago."

How did that go?

Dirnt: It didn't. She went to Los Angeles to a Christian Bible college, and did her thing, which is fine. That's great, you know? I don't so much find myself bitter. I just think that she was jaded in a lot of respects. She wanted to become a psychiatrist, only it goes against her church, so in total tears and agony, she's now decided she can't do that. And that's pretty upsetting considering she could've been a pretty good psychologist. Maybe she could've worked out some of her own problems. I think she's wishing the best. I think that religion has a lot to do with family. I don't think that pumping fear into people is a good way to get them to have morals. Pumping love into people is a better way, and I'm not a hippie … . I do unto others as I would like to have done unto me. I'm a pretty mellow person, I think.

I agree with you in that fear is not a very good motivator.

Dirnt: It's just that when I was a little kid, I had a pastor tell me … you know, I was really confused by a few of the sermons I'd heard, and I asked him, I said, "My mother smokes cigarettes. Will she go to hell if she smokes cigarettes?" And he said, "Yes." And I was seven years old. That was (expletive). I was at church with a friend of mine's family, and it was really (expletive). So I go home thinking my mom's gonna burn in eternal hell, in eternal damnation. In my opinion, heaven is not a place where all my friends aren't. You live your hell on earth, and there might be something further to it than that, but afterwards, our spirit kind of takes off. That's why I'm gonna be cremated. I don't want to be stuck in any box.