Every year, sixty of New York's public school fifth grade classes participate in the American Ballroom Theatre's Dancing Classroom Program. The result: Thousands of ten- and eleven-year-olds learning to tuck in their shirts, make embarrassed eye contact with each other, and dance the tango, rumba, foxtrot, swing and merengue. Mad Hot Ballroom is the documentary that follows the 2004 program in three culturally diverse inner-city schools, from the first dance class to the Finals of the multi-school Rainbow Team Matches competition. The result: A charming, sometimes hilarious, always captivating celebration of childhood, community, music and movement. Only the most lead-footed (or stone-hearted) wallflower could resist this dance.

Mad Hot Ballroom opens in Public School 115 in Washington Heights, and here we find the film's most compelling subjects. We learn from an interview with the school's principal that 97% of the mostly Hispanic school population live below the poverty line, but the students never come across as children to be pitied. They dance (very well) on the brink of adolescence—full of opinions and dreams and passions, but still innocent in ways that are funny and sometimes wrenching. We see them in their dance classes, but we also get snatches of them at home, on the basketball courts, or just hanging out on the neighborhood streets.

We know these streets can be Mean—the kids are matter-of-fact about the crime and the dangers rampant in their environment—but the film's loving treatment of the ethnic shops and restaurants and of the kids themselves show us that the streets are also beautiful. The girls talk about what they want in a future mate: Someone with ambition. Someone who gets an education. Someone who treats them with respect, and cares about family. These could be kids from any American suburb, until one of the girls adds a final item to the wish list. "And he shouldn't sell drugs." Her friends agree: Drug dealers are off the husband list.

Soon we are also introduced to the students at PS 150 in downtown Trebecca, where some of the movie's most precocious fifth graders are found. Tara spends a lot of time rehearsing her moves (which are decidedly more Britney than Ginger) in her bedroom mirror. She explains at one point that she'd like to combine her interests in the future by being a singer who acts and uses dance in her live show. Emma is the film's lovable Cliff Clavin, offering up helpful information and opinions on a variety of subjects. It's from Emma we learn that scientific research has proven that women are the superior species, that ballroom dancing is great because it exposes the softer side of boys and is helping prepare both males and females for future marriage, and that eleven-year-old girls are the Number One target of kidnappers. 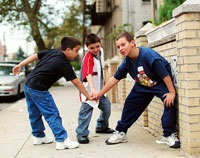 Three boys psych themselves up for the big competition

The third school featured is PS 112 in Bensonhurst, an Italian and Asian neighborhood in Brooklyn. Michael and his buddies Donato and Ronnie meet regularly around the foosball table to discuss various matters, giving us a detailed guide to what (and who) is "mad hot" and what (and who) is not. Michael's tango is as earnest as it is dreadful, and he provides the film with some of its greatest humor and pathos when he's asked to dance an exhibition dance with a girl he doesn't know and who towers over him. ("It was like being forced to dance with an alien," notes a sympathetic buddy.)

Gradually, each school reaches the point where they must select the six couples who will represent them at the Rainbow Team competition. Each couple specializes in one of the five types of dances, while the sixth pair must learn all five in case of illness or injury to any part of the team. Emma gives her class good advice: Whoever is selected for the competition must not boast or brag, because that would make the unselected feel awful. Once teams are chosen, the film moves in fairly short order to the competition, showing us the tearful reactions of the two schools who don't make it to the Finals, and the elation and determination of the team that does.

First-time feature filmmakers Marilyn Agrelo and Amy Sewell do a great job capturing the unstaged magic of the kids, who don't seem to show off any more for the cameras then they do for each other. The film's greatest strength is sometimes its most problematic weakness, however, as it is hard to keep track of such a sprawling cast of characters. I was often uncertain as to which school I was watching in any given scene, and I wasn't able to sort out which teachers worked where until I later visited the film's website.

Fifth graders from Washington Heights PS 115 are feeling the groove

Occasionally we are given some background on a particular child—for example, we learn from a teacher that one boy was well on his way to a career in crime until the dance program captured his imagination and literally changed the trajectory of his life. The film leaves us hungry for more of this type of information, but the sheer number of kids involved limits the details we learn about any one child. However, we are more than compensated for depth with breadth. Screenwriters have built major Hollywood blockbusters on a tenth as many great lines as the kids spontaneously offer up here.

Two of my favorite characters are the boys who explain that their respective religions prevent them from participating in the dancing. They relish their roles as DJs and also offer up a fair amount of coaching from the sidelines. As the child of devout Baptists, I was not allowed to attend school dances, and my university of choice asked me to sign a contract stating that I would not engage in "social dancing." (We students often wondered if anti-social dancing would be permitted, but that's another story). But watching Mad Hot Ballroom, it is hard to imagine anyone objecting to the Dancing Classrooms program. The kids are at an ideal age—old enough to master the steps but too young to have things complicated by any sort of sexual tension, and the program itself enriches their lives in so many ways. We observe firsthand as awkward and sometimes difficult children transform into ladies and gentlemen. We see the powerful effect an adult can have on a child when he treats her with dignity and respect; we watch children accomplish extraordinary things simply because someone believes they can. And the best of the dancing is beautiful. 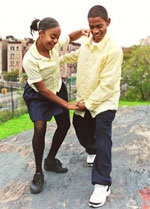 Ultimately, we cheer not just for their dancing, but for their future

Eventually the documentary's focus does narrow in on the school that makes the Finals, where the camera unabashedly plays favorites. But we are rewarded with some remarkably fluid dancing and can't help but share the filmmakers' enthusiasm for the team in question. The outcome is not particularly surprising, but immensely satisfying, and I confess my face actually hurt from sustained and emphatic grinning at the film's climax.

Whatever its imperfections, Mad Hot Ballroom has so much going for it that it's truly irresistible. It's a film about underdog triumph, kids who turn their lives around, and the passionate teachers who help them. In all its unscripted glory, it shows us pre-adolescence with an astonishing authenticity that should be the envy of a hundred coming-of-age movies. Ultimately, it celebrates hard work, cooperation, respect, talent, passion and beauty.

Midway through the film, Yomairi, P.S. 115's zealously committed teacher, admits with a sort of heartbroken resignation that many of the children in the Dancing Classrooms program will eventually end up on the streets. She later tells her students that the one thing that will give them a future is to find something they do well and give it everything they've got. It is Mad Hot Ballroom's triumph that, watching the kids move with grace across the ballroom floor, we cheer not only for their dance, but for their future.

Carolyn Arends is a Christian singer/songwriter, author, movie buff, wife and mother of two who lives in Vancouver, British Columbia.

Mad Hot Ballroom is rated PG for mild thematic elements. Many of the children live in high-crime areas, a fact that is neither denied nor glorified. The presence of drug dealers is mentioned more than once, and one girl warns her friends that once they get their "woman shape" they should be careful around drunk men. In another scene, one boy is made to apologize to another for calling him "gay." All of this subject matter is treated responsibly and the movie never lingers on this material. We would take our seven-year-old son to see the movie as long as we were present and able to discuss it with him afterward. There is no cursing and much of the film would lead to terrific family discussion.

Mad Hot Ballroom follows some New York 11-year-olds as they learn the steps of ballroom dancing, tell their own stories, and work their way toward a citywide competition. You'll see them do the merengue, rumba, tango, the foxtrot and the swing, and you'll see them learn and grow as well.

Annabelle Robertson (Crosswalk) writes, "When you see the way these kids swing, tango, rumba, and merengue, you just may want to join in on the fun. I know I did. … What's amazing is that the kids not only learn to dance like professionals—and boy, do they—but how very much their lives are transformed in the process."

Mainstream critics are almost unanimous in their praise. Ty Burr (Boston Globe) raves, "Take the kids. The 10-year-old I had the pleasure to watch the movie with was transfixed, racked with suspense, and mirroring the moves before it was half over."

Harry Forbes (Catholic News Service) calls it "a generally appealing documentary. The film feels a bit long. … But the joy of the transforming experience and the music … transcend the physical drabness of the urban public school setting."

1 of 4
Student dancers Wilson and Jatnna practice their movesThree boys psych themselves up for the big competitionFifth graders from Washington Heights PS 115 are feeling the grooveUltimately, we cheer not just for their dancing, but for their future