Coming off a string of flops (Gigli, Jersey Girl, and Shall We Dance—OK, I admit it, Shall We Dance was one of my 2004 guilty pleasures), Jennifer Lopez hopes her new film, Monster-in-Law, will break that slump. Well, keep hoping, J-Lo, because besides Jane Fonda's return to the big screen for the first time since 1990, there's little else of note in this forgettable movie, directed by Robert Luketic (Legally Blonde). 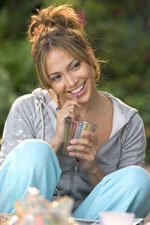 Charlotte "Charlie" Cantilini (Lopez) is a thirtysomething woman who works odd jobs because life's too short to not take advantage of variety. Charlie's personality isn't the only free-spirited thing in the film; so is her approach to religion. Within the first five minutes of the movie, Charlie references horoscopes, karma, and tarot cards in order to determine her destiny. As she reads her horoscope (something along the lines of "Love is right in front of you"), she looks up and sees Kevin Fields (Alias' Michael Vartan) running down the beach. They make eye contact and—voila!—Charlie's horoscope seems to be right on the money.

After a short courtship, Charlie and Kevin decide to get married. Enter Kevin's mom, Viola Fields (Jane Fonda), as the title character. As usual, Fonda looks great. She may be 67, but she's got more vivacity and oomph than most 20-year-olds. With her beauty comes a grand elegance—and a style and grace that makes Lopez, by comparison, look like an amateur. And J-Lo's been acting for nearly 20 years.

But Viola's not happy. She's had some misfortune in her professional life and now she wants to reconnect with the only family that she has: her son, Kevin. What mother doesn't know, though, could kill her! When Viola witnesses Charlie and Kevin's engagement, she imagines smashing Charlie's face into the teatime cake. She then asks Ruby (Wanda Sykes), her longtime assistant, to open a bottle of celebratory champagne. (Viola had sworn off alcohol, but turns back to drink in order to cope with the recent "good news" engagement.)

As the wedding draws near, Charlie and Viola's antics get nastier and more underhanded. In order to give the girls some bonding/fighting time, screenwriter Anya Kochoff practically leaves Kevin out of the script. As Charlie and Viola duked it out, I grew more and more restless.

The movie didn't take advantage of all the possibilities about a storyline involving a horrible mother-in-law. For such a rich premise, Kochoff produced a fairly lackluster script. Kevin's character is forgettable. Viola is completely over-the-top and one dimensional for 99.9 percent of the movie. And, Charlie = Jennifer Lopez. Not that her acting chops (or lack thereof) rest solely on the screenwriter, but the writer didn't make Charlie's character very challenging. I could see several actresses in Charlie's role. Lopez didn't "make it her own," as American Idol judge Randy Jackson might say.

If you miss Monster-in-Law, you aren't missing much. If you want to check out Jane Fonda's return to the silver screen, just make it a rental down the road.

Monster-in-Law is rated PG-13 for sex references and language. There's a scene of mating dogs. Charlie and Kevin have premarital sex. Charlie's best friend, Remy, is gay. Viola's character has been married four times. There's lots of nasty sarcasm between Ruby and Viola. And the premise of the movie is played out with Charlie and Viola doing fairly horrible things to one another, all in the name of hostility.

Robert Luketic (Legally Blonde) directs Jennifer Lopez and the comeback-actress of the year—Jane Fonda—in Monster-in-Law, the latest in a trend of popular comedies about marriage and in-laws.

Christian film critics are saying Fonda could have chosen a better film for her big-screen return.

Mary Lasse (Christianity Today Movies) writes, "If you miss Monster-in-Law, you aren't missing much. If you want to check out Jane Fonda's return to the silver screen, just make it a rental down the road."

Andrew Coffin (World) says, "Monster-in-Law is occasionally funny, but grows increasingly shrill and unpleasant as the battle between Charlie and Viola escalates. Add in some forced, crude humor (when did it become acceptable to use an obscene gesture as a stand-in for the one taboo profanity in a PG-13 rated movie?), and Monster-in-Law squanders what little appeal it may have held."

Christopher Lyon (Plugged In) says, "Those who catch [Fonda's] much-hyped return to the big screen will be nearly united in their disappointment with Monster-in-Law. It's not for lack of trying. Fonda plays her whacked-out TV diva/mom so far over the top, most of the other actors seem to be standing still. In fact, she's just too far over, delivering a grating, manic performance I kept wishing director Robert Luketic had turned down a notch or two. Add to that an above average amount of crude sexual content for a romantic comedy, and it's tough to scare up any good reasons to catch this Monster movie."

Michael Elliott (Movie Parables) says, "No one will be mistaking the humor of Monster-in-Law as being that of a sophisticated wit. It's as subtle as a slap in the face … an event which occurs repeatedly in the film. The film … relies too heavily upon cheap jokes, crude humor and the appeal of its stars. Only the latter gets anything close to a passing grade. The script by Anya Kochoff is barely passable—a formulaic, wafer-thin story that is as implausible as it is predictable."

"I can understand Jane Fonda's desire to return to the big screen, after a 15-year hiatus," Ananbelle Robertson (Crosswalk) says. "But did she have to pick this movie for her big comeback? The plot of Monster-in-Law is nothing more than a female version of Meet the Parents or Father of the Bride. And it had great potential, playing off a cliché that sadly is more often true than not. But instead of amusing antics, we get tired truisms."

Fonda's comeback distresses many mainstream critics. One writes, "Fifteen years absent from the big screen, and this is what Jane Fonda comes back to? Catfights with J. Lo?"