Dennis Quaid has played all sorts of roles, including recent family films like the brand-new Yours, Mine & Ours. Here, he identifies himself as a Christian, but also a "spiritual seeker."
interview by Peter T. Chattaway |November 21, 2005

Few actors have had as versatile a career, or have matured as well, as Dennis Quaid. Born in Houston in 1954, he rose to stardom in the 1980s with roles as diverse as a real-life astronaut (The Right Stuff), a New Orleans homicide detective (The Big Easy), a test pilot who is miniaturized and injected into Martin Short's body (Innerspace), an aging football jock (Everybody's All-American), and of course Jerry Lee Lewis (Great Balls of Fire!).

Quaid's star faded in the early 1990s, but in recent years he has earned praise for his work in movies as diverse as the time-bending sci-fi flick Frequency, the political drama Traffic, the real-life sports story The Rookie, and the independent film Far from Heaven, in which he played a closeted gay man married to Julianne Moore.

Now he is dabbling in physical comedy and family films. Yours, Mine & Ours, which opens this week, is a remake of a 1968 film and based on the true story of a widow (played here by Rene Russo) with eight children who married a widower (Quaid) with ten children. Quaid himself has a 13-year-old son, Jack, from his marriage to Meg Ryan, which ended in divorce four years ago. He has since married a woman who, like him, grew up Baptist in Texas.

Quaid spoke to Christianity Today Movies in Los Angeles—first in a private interview, then at a roundtable with several other reporters. The following is an edited transcript from both of those conversations.

You've had an incredibly versatile career, ranging from jock roles to roles with more of a fantasy, sci-fi appeal, and you've also worked in more straightforward dramas. Have you made a point of working in all these various niches? 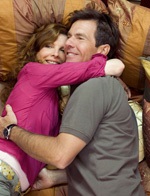