There's a scene early on in North Country that hints at what's to come. Josey Aimes (Academy Award winner Charlize Theron), who's just escaped her physically abusive marriage and returned home to start over, is sitting in church with her parents and two kids. A row of fresh-faced girls in white frilly dresses enters the sanctuary for their first communion. There's something moving about seeing Josey's still swollen and bruised face and then cutting to the priest pronouncing "The Body of Christ, broken for you" while placing the wafers in the young girls' mouths.

Broken is an apt word for this woman who's already suffered much. And broken further she will be as she seeks a fresh start for herself and her kids through a difficult but lucrative job at the local mine, where she and the handful of other female employees are the sacrificial lambs for all the women who would one day dare to "take a man's job away from him," as many of the locals see it. 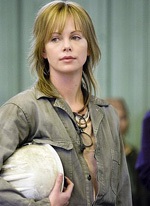 Charlize Theron in the lead role as Josey Aimes

The first scenes of the mine—aerial shots of the billowing steam rising from the towering smokestacks in the frigid Minnesota air—speak a lot as well of the pressure that's building within. The black coal and dirt laden with white snow—and Josey's black eye contrasting with the clean, white communion dresses—whisper of the rigid, black-and-white ways of this small, late 1980s, blue-collar town. Ways that are about to be challenged.

Josie's parents are the first to express disapproval of her new job. When she tells them of her new employment, her father (Six Feet Under's Richard Jenkins), who's worked at the mine for decades, just stares at her, then blurts, "So you want to become a lesbian?" Her cowering, compliant mother (Academy Award winner Sissy Spacek) tells Josie that her new job will shame her father.

But inspired by her friend Glory (still another Academy Award winner, Frances McDormand), who also works at the mine, and a salary that's six times higher than any "women's work" she could get, Josie persists. And while she's prepared for the back-breaking work, she isn't prepared for the sexual harassment dished out daily to the female employees. 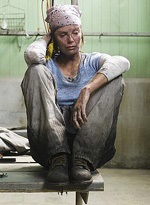 The mines are a tough place to work, in more ways than one

During orientation, Josie's new boss tells her and five other new female workers that he thinks they're stealing jobs from deserving men, and tells Josie in particular that the company doctor said she looks "real good under those clothes," referring to the mandatory gynecological exam they all underwent. In the subsequent weeks, unprintable things are shouted at them on the work site, spelled out in human feces on their locker room walls, left for them in their lockers and lunches, and even done to them in dark corners of the mine.

Most of the women seem resigned to "take it like a man" and accept their paycheck every two weeks. But Josie speaks out against the ugliness and discrimination, eventually suing the company in a landmark sexual harassment class action suit. In fact, most of the film is told in a series of flashbacks as Josie makes her case and is cross-examined on the witness stand.

North Country is inspired by true events and the book Class Action: The Story of Lois Jenson and the Landmark Case that Changed Sexual Harassment Law. (The real Lois Jenson says she likes the movie.) Along with the tensions and issues, the movie does a great job of capturing a small working-class town. The mineworkers are believably gritty, the hair and clothing styles painfully 1980s. 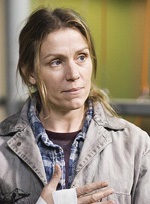 On the heels of her award-winning role in Monster, Theron shines again in a role where she's not afraid to look ugly. Dressed in a mine jumpsuit and safety goggles, there's nothing Hollywood beautiful about her. And her range of emotion is impressive—from joy and pride when she buys her first home, to indignation and rage when she's falsely accused of sleeping around with her male coworkers, to vulnerability and fragility as a single mom out on the town with the girls looking for a nice man to dance with. Oscar buzz is sure to follow.

And it doesn't hurt that she's surrounded by an immensely talented cast. McDormand reprises her Fargo accent and believably blue-collar ways. Sean Bean is excellent as her quietly supportive husband, Kyle. Richard Jenkins, who plays Josie's dad, gives a moving speech to his union meeting (though his character's change of heart is too quick and too strong). Woody Harrelson as a new divorcee trying to get up the nerve to ask a woman to dance is achingly awkward and real (though his motivations inexplicably shift throughout the rest of the film).

Josey gets ready to address members of her union

Some of these latter characters provide a needed contrast for all the male ugliness throughout the rest of the film. Thankfully, not all men in North Country are bad. Some are good, but too scared to make waves. Others are quietly full of integrity and truth. On the flip side, some of the women in the film aren't so great. The female attorney for the mine is underhanded and riddled with contradictions, and many of Josie's coworkers resent her speaking out. This isn't as much a film about men against women, as it is a film about the powerful exploiting the powerless—and standing up for what's right, even when you have to do so alone.

Though tough and heavy-handed at times, for the most part North Country is engaging—not one of those films about an important subject matter that you feel you should watch. But unfortunately, things break down toward the end of the film when all the action is in the courtroom. The court case bogs down in a tangential incident from the past, and we never quite know why the whole truth took so long to come out. Bill (Harrelson), Josie's attorney, is allowed an awful lot of latitude by the judge to editorialize and lean on witnesses, who fold too easily. In the final 20 minutes, the film switches gears from Norma Rae to Perry Mason. But the end, despite being a tad schmaltzy, is satisfying.

North Country is rated R for sequences involving sexual harassment including violence and dialogue, and for language. This isn't a family film. There's tough language, underage drinking, sexual innuendo, violence, a rape. The subject matters are tough, though for older mature teens and up, the film could be a good discussion starter about important issues.

Amazing audiences yet again with her ability to transform her glamorous good looks into something bruised and grimy, Charlize Theron turns in a rave-winning performance in North Country.

Theron, who won an Oscar for Monster, plays Josey Aimes, a woman taking on a Minnesota mining company in a landmark sex-discrimination case. Loosely based on true events, the film was written by Michael Seitzman and directed by Niki Caro, who also directed Whale Rider.

While critics cheer the film's message, they're not entirely satisfied with the storytelling.

Camerin Courtney (Christianity Today Movies) says, "Along with the tensions and issues, the movie does a great job of capturing a small working-class town. The mineworkers are believably gritty, the hair and clothing styles painfully 1980s. … Theron shines again in a role where she's not afraid to look ugly. … And it doesn't hurt that she's surrounded by an immensely talented cast. Though tough and heavy-handed at times, for the most part North Country is engaging—not one of those films about an important subject matter that you feel you should watch."

There is, however, a small problem. Courtney explains that "things break down toward the end of the film when all the action is in the courtroom. … In the final 20 minutes, the film switches gears from Norma Rae to Perry Mason. But the end, despite being a tad schmaltzy, is satisfying."

David DiCerto (Catholic News Service) calls it "a film with a compelling story and forceful performances. … Registering a calibrated blend of vulnerability and pugnacity, Theron's affecting performance—complete with convincing Minnesota cadence—is even more impressive than her physique-transforming work in Monster and could well earn her a second Oscar, putting to bed any lingering doubts about her acting chops. … [It's] a thoughtful and deeply moving film that explores themes of justice, family and community."

Tom Neven (Plugged In) says, "To make her points stick … [Caro] populates parts of this story with two-dimensional caricatures and lays on a fair amount of emotional manipulation. But in so doing, she makes it impossible to miss her message: Women deserve respect in the workplace—any workplace—and no human being has the right to humiliate and sexually intimidate another. … My only wish is that she could have found a way to convince us that life is precious and that respect is essential without simultaneously forcing us to witness such graphic scenes of rape, assault, obscene abuse and grotesque harassment."

"The interaction between father and daughter provides North Country with its best moments," writes Christian Hamaker (Crosswalk). "His slow transformation into her ally better illustrates Josey's personal shame, quiet dignity and difficult life choices than does the main storyline about workplace equality. Nevertheless, it's not enough to redeem the film, which builds to an orchestrated courtroom finale that strains credulity."

Kenneth R. Morefield (Christian Spotlight) says, "To be about what it is about, North Country has to show us a lot to make us understand what Josey and the other female miners went through." He goes on to list some of the harsh content viewers will encounter in this film. "None of this is depicted gratuitously or for erotic effect," he adds, "so I did not find the depictions of it to be morally objectionable—I simply recognize that some viewers … would prefer not to watch or listen to depictions of some subjects. For audiences that are willing to think about the subject matter, I thought North Country was a good film, but not a great one."

Though they're similarly dissatisfied with the film's more schmaltzy elements, mainstream critics give North Country credit because its message points us in the right direction.

"The first two thirds of the movie is compelling if predictable," writes J. Robert Parks (Phantom Tollbooth). "But the courtroom finale is hokey and manipulative … We even have a moment right out of A Few Good Men. I half expected someone to start barking, 'You can't handle the truth!'"

But Denny Wayman and Hal Conklin (Cinema in Focus) rave, "The gripping and realistically touching sequences between Josey and her father and her son are worth the price of admission. North Country is one of those films that should be repeatedly shown in high schools everywhere. It is as important a lesson in American history as any war ever fought."

1 of 4
Charlize Theron in the lead role as Josey AimesThe mines are a tough place to work, in more ways than oneFrances McDormand plays Josey's good friend GloryJosey gets ready to address members of her union