Spelling bees are all the buzz right now. Four years ago, the documentary Spellbound gave us a gaggle of eccentric, word-obsessed children—and their sometimes even more eccentric parents. Last year, Bee Season gave us a rather strange but visually inventive dysfunctional-family drama steeped in Kabbalistic mysticism. And now, Akeelah and the Bee gives us the uplifting after-school special about a girl from a bad neighborhood who rises above her circumstances with the help of a few grown-ups who believe in her.

The new movie is every bit as clichéd and predictable as you'd expect, but thanks to some fine performances, especially from the young leads, it is quite watchable. Keke Palmer is especially convincing as the frustrated but easily intimidated Akeelah Anderson, an 11-year-old who knows she's smart but is afraid to let it show, even when the teachers encourage her, because it will mean further mockery and ostracism from her so-called peers.

Akeelah loves words because her late father did, before he became yet another victim of the streets; to honor him, she plays Scrabble games with his photo. She gets some moral support from her eldest brother when he's home from his stints with the Air Force, but the rest of her family is a set of inner-city obstacles waiting to be overcome: an overworked mother, Tanya (Angela Bassett), who objects to Akeelah's ambitions more often than not; a brash older sister, Kiana (Erica Hubbard), with an illegitimate baby; and another brother whose, uh, activities outside the home are never really spelled out—but if he wears expensive watches and attracts the attention of the police, they probably aren't all that good.

School isn't much better. Like a lot of smart kids, Akeelah ... 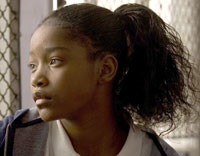