Country music legend Marty Stuart has worked with Bob Dylan and Johnny Cash and tasted much mainstream success. But he returns to his spiritual roots with Souls' Chapel.
Andy Argyrakis|April 3, 2006

Between his run as a solo artist to his collaborations with Lester Flatt, Bob Dylan and Johnny Cash to his signature puff of gray speckled hair, Marty Stuart is one of the most recognized and revered country artists of the past quarter century. While he's traveled mostly in mainstream circles, Christianity has always been a vital component to his life, His recent Souls' Chapel CD includes several Bible belt standards and original hymns cut in country, bluegrass or Southern gospel styles. While making that album, Stuart was actually arrested for drinking and driving, which he now sees as a "wake-up call" from God—and Stuart's been on the straight-and-narrow ever since. We caught up with Stuart to talk about that incident, his new album, his start-up record label, his music memorabilia collection, and much more.

What inspired you to craft Souls' Chapel?

Marty Stuart It's something I've been wanting to do for 15 years. Like so many other performers, the first place I ever sang was church. I was raised there and it was my natural habitat throughout the week. My first job was in a Pentecostal bluegrass band. When I got a record deal, the natural thing in my mind was to do a gospel record, but mainstream country had changed drastically. They wanted me to cut radio hits and nothing else, so I had to write gospel music for others.

But when I was creatively pardoned [by starting his own label], I was able to do exactly what I wanted. I was at a point in my career where I was wondering what to do creatively. I always depend on God to send music through me, so I simply asked him, "What do you got for me?"

Who were your primary gospel music influences?

Stuart Mainly The Staple Singers and Sister Rosetta Tharpe. I ran into the Staples ... 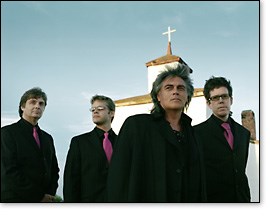