Dissatisfied with the way the Rocky franchise ended 16 years ago, Sylvester Stallone has written a new final chapter—one that brings his faith into the picture more than ever. He gives us the scoop.
by Mark Moring|December 19, 2006

When Sylvester Stallone was 15, his classmates voted him "most likely to end up in the electric chair."

That's not quite how it turned out, but he did end up in the boxing ring with Rocky, the 1976 classic that won Academy Awards for Best Picture and Best Director, and earned Stallone nominations for Best Actor and for Best Screenplay.

The Rocky franchise kept on going, but great movies turned to good ones, then to mediocre ones, and finally, by the time Rocky V came out in 1990, to lousy ones, leaving a bad taste in fans' mouths.

Apparently it left a bad taste in Stallone's too. Ever since Rocky V flopped at the box office and with critics, he has wanted to make things right. But MGM/United Artists, which owned the rights to the Rocky franchise, said there was no way they'd ever revisit the story again.

Stallone never gave up. He wrote a script for Rocky VI anyway, knowing it may never be made into a movie. But he finally met someone who believed in the script, who pulled some strings, pushed some doors, and put up some big money. And now the Rocky VI opens in theaters nationwide on Dec. 20.

Only it's not called Rocky VI. It's called Rocky Balboa, and Stallone, who also directed the film, says this is definitely the last chapter—not only in the story of the rags-to-riches boxer from Philadelphia, but as the end of a spiritual journey … for Rocky, and for Stallone.

Stallone, 60, says he's been a Christian most of his life, and that he tried to include spiritual imagery in all of the Rocky films—but never more so than in this new one. A Christian marketing company, Motive Entertainment, is even pitching the film to the faith community, complete with resources for the church—sermon ideas, Bible studies, ... 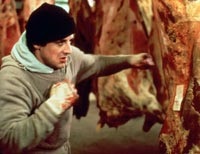