Amateur filmmakers Heather Whinna and Vickie Hunter were fairly clueless about Christian rock music, but that didn't keep them from making a stirring documentary about the scene.
by Mark Moring|February 21, 2006

Five years ago, Heather Whinna and Vickie Hunter, by their own admission, were both fairly clueless about Christian rock music.

Hunter's only exposure to the genre was music videos on late-night TV. And Whinna's only exposure had been through her boyfriend, recording engineer Steve Albini, who had worked with a few Christian bands at his studio.

But what little they knew about Christian music prodded Whinna and Hunter to want to know more—to the point that they decided to make a documentary. So the amateur filmmakers—"We know how to hit the go button," jokes Hunter—put together a makeshift crew and headed off to the 2001 Cornerstone Festival to start rolling the videotape.

Four years and a couple more visits to Cornerstone later—and after working with editor Michael Dahlquist to whittle 170 hours of tape down to 90 minutes—they had their movie, Why Should the Devil Have All the Good Music?, which went on to win the Audience Choice award at the Chicago Underground Film Festival.

But perhaps more noteworthy is that the film has been praised for its objectivity, which makes Whinna and Hunter additionally proud. Why? Because neither is a Christian, and they both came into the project with preconceived notions—including some stereotypes—about Christians and the evangelical subculture.

Whinna, 34, and Hunter, 37, recently stopped by our offices to screen the film—now available on DVD—and hang around for a Q&A.

When did this idea come about?

Heather Whinna: About nine years ago. I love documentaries and I thought, oh, I could do that. I met some bands from Jesus People USA, and they started telling me about Cornerstone. That would be the setting. I didn't want to make the movie ... 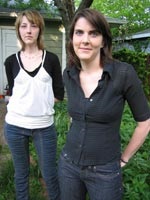