One of my favorite film scenes comes in M. Night Shyamalan's film Unbreakable, when Samuel L. Jackson—playing an eccentric collector of comic books—explains to our unwitting hero, Bruce Willis, the importance of the superhero mythology as a mirror for the human condition. According to ol' Sam, there's more to a comic book than just grown men wearing tights and punching each others' lights out; superhero stories are underappreciated art forms, tall tales in which the truth is exaggerated but still reflected in a powerful way. His theory seems quite credible—indeed, one need look no further for proof than to Pixar's blockbuster hit The Incredibles, a movie in which superpowers come to represent the different gifts of each character, turning a super-parody into a super-insightful story about families and the different roles that each family member plays.

My Super Ex-Girlfriend is the latest film to take the superhero myth and transport it into mundane, everyday life—and, when compared to a movie like The Incredibles, it might seem like something of a missed opportunity, as it doesn't quite milk its rich material for insights into the human condition. In other words, the tropes and trappings of a superhero story are here, but they never become symbolic or representative of anything particularly profound. Rather, they're here just to fuel the film's comedy and romance. And that's just fine, for while it may not be anything especially thought-provoking, Super Ex happens to be one of those extremely rare romantic comedies that is, in fact, both romantic and comedic—not to mention surprising and altogether likeable.

If you've seen the trailers—heck, even if you just know the film's title—you ... 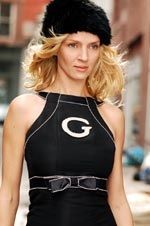