The longest gap between James Bond movies was six years, between the Timothy Dalton and Pierce Brosnan eras. The longest gap between Batman movies was eight years, and Star Wars went sixteen years between films. But the longest gap between Superman movies beats them all. It has been nineteen years since Superman IV: The Quest for Peace brought the once-mighty series—starring Christopher Reeve—to a cheesy yet sanctimonious end; and what's more, Superman Returns ignores the last two films entirely and positions itself as a direct sequel to the first two movies, both of which came out over a quarter-century ago. So when the new film's opening credits begin, with the John Williams fanfare blaring from the speakers and the blue letters streaking across the screen, they boldly herald what may be the most daring attempt at franchise resuscitation in movie history.

Director Bryan Singer, whose work on the first two X-Men movies played a key part in putting superheroes back on the big screen, certainly makes frequent nods to Superman's past. In one scene, Superman (Brandon Routh) holds a car above his head, at an angle that perfectly matches his pose on the cover of the first issue of Action Comics. The first time we see Lex Luthor (Kevin Spacey), he persuades a wealthy widow to leave him her entire estate—and she is played by Noel Neill, who played Lois Lane on the 1950s TV show (and Lois's mother in the 1978 movie).

But Singer is, if anything, a little too stuck in the past. Superman Returns not only stands on the shoulders of the first two movies, it also retraces their footsteps, sometimes in small ways (e.g., numerous bits of dialogue are recycled here, and nothing new or fresh is done with them), and sometimes ... 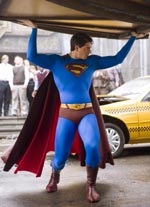