Bruce Willis is one of our more unpredictable leading men, and bless him for it. At times he's a guns-blazing action hero, at other times he's a world-weary serious actor, and then there are those times when he's a would-be funny-man who's a little too heavy on the smirk. The variety of his output extends to his choice of projects, which range from preordained blockbusters to small, risky independent flicks, with more conventional genre pics in-between. This unpredictability can give his films a certain suspense, apart from their content; you never entirely know whether the film he has picked will be worth his time and ours, and for every praiseworthy The Sixth Sense, there is a disappointing Hostage.

At first glance, 16 Blocks might look like one of his lesser efforts. It's a potboiler in which Willis plays an aging New York City detective named Jack Mosley who reluctantly agrees to take a witness named Eddie Bunker (Mos Def) from the police station to the courthouse, but then discovers that a number of dirty cops—including his former partner—are determined to prevent the witness from getting there. Like the title says, there are only 16 blocks between the station and the courthouse, and Mosley has nearly two hours to get his witness there; but the streets and alleys are swarming with obstacles, and you can easily imagine screenwriter Richard Wenk (writer-director of Just the Ticket) sitting at his desk and brainstorming ways to drag the chase out to the very last minute, while throwing in the occasional escape hatch for our protagonists. As the story unfolds, each plot twist feels like the sort of thing that would happen only in a movie, because that's exactly what it is. 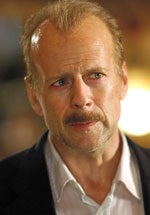