Poor Lindsay Lohan. Once one of the more promising teenaged movie stars, she has since begun to talk openly of her desire for more grown-up roles, but the powers that be have been slow to give her that opportunity—so she has had to make do with rather lame "transitional" movies. The publicity materials for Just My Luck claim that Ashley Albright, the protagonist of this film, is Lohan's first "adult" character—but that may depend on how one defines the word. On the one hand, I don't think Lohan's character was still going to high school, exactly, in last year's Herbie: Fully Loaded. On the other hand, while Ashley and her friends in Just My Luck may have jobs and apartments in New York City, they still behave like adolescents. 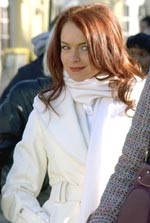 To make things worse, Just My Luck is a formulaic romantic comedy saddled with a really dumb gimmick. Apparently, while most people go through life experiencing good luck and bad luck alike, some people are born into this world with a strong case of just one or the other. Ashley is one of the good-luck people: rain showers turn to sunshine when she steps outside, money turns up in the street when she steps off the curb, taxis and elevators show up exactly when she needs them, and her boss at a public relations firm, Peggy Braden (Missi Pyle), promotes her to the company's highest ranks even though she acts like little more than a glorified intern.

Ashley takes all this good fortune in her stride, but her friends sense something unusual, and they even go so far as to "test" their theory that Ashley is always lucky; they buy a scratch-and-win card, pass it to Ashley, and tell her to scratch it—and sure enough, she wins. It's a wonder they don't all head to a casino.

And then there are the unlucky people, of whom we meet two. The main one is Jake Hardin (Chris Pine, The Princess Diaries 2), whose morning, the first time we see him, is a series of frustrations and embarrassments. Jake manages a British rock 'n' roll band, and he wants to get their CD into the hands of music mogul Damon Phillips (Faizon Love), so he stalks the man as Damon takes his dog for a walk through the park. And along the way, Jake's pants rip when he bends over, he gets dog poop on his hand, a woman runs right into him when he tries to wash his hands in a pool, and then when his pants fall down she beats him up and calls for the police, who promptly take him down to the station. Are we laughing yet?

The only person who sympathizes with Jake is his neighbor Katy (Makenzie Vega, younger sister of Spy Kids' Alexa Vega), a girl who has her own share of bad luck. We don't see too much of her, but we see enough to understand that she, too, is a "loser," in Jake's words, and that this is why she and Jake get along so well.

Inevitably, Ashley and Jake meet. Ashley is put in charge of a masquerade party for Damon's record company, and Jake ends up crashing the party in yet another attempt to get his CD into Damon's hands. Somehow, Ashley and Jake end up on the dance floor together, and even though neither one has a clue who the other person is—and even though Ashley has just started seeing some other guy—they kiss. And then, suddenly, he's got all the good luck and she's got all the bad.

But is it really bad luck that Ashley has? Sure, the heel breaks off her shoe and her dress tears and the police arrest her for matching up her boss with a neighbor, Antonio (Carlos Ponce), who turns out to be a male escort. But a lot of what happens to her afterwards just seems self-inflicted, the result of stupid decisions, like when she runs the water in a bathtub after throwing a still-active hair-dryer in there, or when she develops an eye rash after fishing a contact lens out of a cat's litter box, or when she tries to do janitorial work at a bowling alley in high heels, or when she pours way, way too much detergent into someone else's washing machine.

At any rate, Ashley figures out fairly soon that she lost her luck because of that kiss, but since the guy she kissed was wearing a mask, she has no idea who he is. Thus, she embarks on a quest to track down and kiss a long list of men who were at the party—and since Jake was never supposed to be there, he's not on her list. But of course, this does not prevent her from bumping into him anyway; they don't recognize each other, but he does know what it's like to have nothing but bad luck, and he can tell that she is a "loser" like he used to be, so he takes her under his wing, helping her find a new job, inviting her to concerts, and so on.

Hmm, wonder who Ashley ends up with in the end

Meanwhile, Jake goes from success to success with his band—saving Damon from a freak auto accident and thereby getting time in his recording studio, putting his band's first single on the radio, selling out a major concert venue. You might be inclined to think that his success would have to be due to his newfound luck, since the music this band plays is nothing special, despite the frequency with which the other characters applaud them and say "That's great!" However, the band in question, McFly, is a bona fide successful British band in real life, and the four guys who make up the band are essentially playing themselves in this movie.

We might ask what on earth these lads were doing with a "loser" like Jake in the first place—surely there are easier ways to penetrate the North American market than hooking up with a bowling-alley janitor—but the more important point to note here is that McFly's target audience in real life is primarily made up of teenaged, even pre-teen, girls. That, perhaps more than anything, lets you know just what sort of movie this really is, all claims to "adulthood" aside. One day Lohan will make movies for grown-ups—and with A Prairie Home Companion just a few weeks away, that day may be sooner than we think—but this movie certainly isn't one of them.

Just My Luck is rated PG-13 for some brief sexual references. Some concern Ashley's boss and the male escort she hooks up with, others concern the hot young men that Ashley kisses rather promiscuously (one of whom is apparently gay and mistakes her for a guy), while others concern a woman who makes mildly suggestive remarks to Jake. Also, there are a few four-letter words, and repeated references to tarot cards and various superstitions (opening umbrellas indoors, breaking mirrors, etc.).

Lindsay Lohan seems to be making the jump from light, teen-oriented comedies to slightly more grown-up fare—later this summer we'll be seeing the Mean Girls star in Robert Altman's A Prairie Home Companion, and she's also working on a biopic of Robert F. Kennedy. For now, though, her target audience remains teen and preteen girls, as the youthful romantic comedy Just My Luck makes clear.

With a plot that seems borrowed from a classic episode of Seinfeld, Lohan's latest vehicle finds her playing the perpetually lucky Ashley Albright. Her foil—and love interest—is Jake Hardin (Chris Pine) who seems to have nothing but bad luck. Or at least, it's all bad luck until he and Ashley meet and, eventually, kiss. Then, suddenly, their fortunes are reversed—he's got all the good luck, and she's stuck with complete misfortune.

And so, it would seem, are the Christian critics who had to watch this film.

Adam R. Holz (Plugged In) is also unimpressed: "Just My Luck causes real concern. Its general mindset toward sex is casual. For example, Ashley's friends immediately inquire if she slept with a guy on their first date. Similarly, sharing a passionate kiss with a masked, anonymous stranger is treated as business as usual for Ashley. These elements, combined with profanity, spoil what could have been a much sweeter film."

Lisa Rice (Crosswalk) is troubled by the film's romantic take on mysticism and superstition: "Regrettably, Just My Luck works because it's based on things like astrology, fortune telling, tarot readings, and Karma—most of which are specifically forbidden, biblically speaking."

Sherri McMurray (Christian Spotlight) is also troubled by the film's spirituality, and criticizes it for being "a flimsy, formulaic film [whose] few saving graces include a drool-worthy wardrobe and a few slapstick giggles that Lindsay is so perfect at."

1 of 4
Lindsay Lohan stars as Ashley Albright, New York City's luckiest womanAshley shares a kiss with Jake (Chris Pine), forever changing their luck and livesDana (Bree Turner), Maggie (Samaire Armstrong) and Ashley try to find their way through shifting fortunesHmm, wonder who Ashley ends up with in the end