Calvin College graduate Geert Heetebrij made a quirky-but-wonderful indie film a few years ago called A Foreign Affair, starring Emily Mortimer and Tim Blake Nelson. The movie never hit it big, but critics (two thumbs up from Ebert & Roeper!) and audiences loved it.

We interviewed Heetebrij about the film at the time, but hadn't heard about him—or from him—again till recently, when he and old friend Helmut Schleppi wrapped up a new movie called The Interior.

The film—written/created by Heetebrij and directed by Schleppi—is about new Christian missionaries embarking on their journey in a South American jungle.

It's like no film that's ever been done before: They put out a casting call on YouTube, and received hundreds of video auditions, ultimately narrowing it down to the four lead roles—the young missionary couple new on the field, and an older missionary couple that is, uhh, pretty weird and creepy. The film is now being released online in episodes over the course of about four months—playing out episodically like a TV series, but the end result will be about a 90-minute film available for purchase on DVD this fall or winter.

Heetebrij took out a second mortgage on his home—with his wife's blessings—to fund the project, which was filmed in the jungles of Panama. We caught up with the writer recently for an e-mail interview to learn more about the project.

How/where/when did the idea for The Interior come about?

Geert Heetebrij: One day early last year, Helmut and I were shooting the breeze, when he shared some anecdotes from his upbringing as a missionary kid in the jungle in Suriname, really intriguing, and I joked that it was a crime that he had never done anything with all of ... 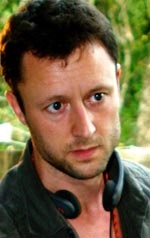