The relentless clickety-clack of a typewriter never sounded so ominous, or mournful, as it does in Atonement, Joe Wright's heartbreaking adaptation of the acclaimed novel by Ian McEwan. The film is full of people typing—a girl writing plays, a man composing apologies, a woman spelling out her guilt in the hope that all can be forgiven—to the point where the pounding of the keys is woven into the very score, making Dario Marianelli's music sound even more urgent than it already does.

The story begins in 1935, with 13-year-old Briony Tallis (Saoirse Ronan) at home on her family's estate and writing a play for her cousins to perform. They don't take direction well, though, and when they abandon her, she wanders to the window and witnesses a mysterious encounter between her adult sister Cecilia (Keira Knightley) and Robbie Turner (James McAvoy), the son of the family's housekeeper.

This encounter, and the fact that Briony sees it but doesn't know how to understand it, sets in motion a series of events that ultimately leads to Briony accusing Robbie of a crime—and the accusation ruins not only his life, but Cecilia's, too, because she loves him and is the only one in her family who believes in his innocence.

The film then leaps ahead to 1940. Robbie is a soldier stranded in France during the disastrous retreat at Dunkirk, while Cecilia and a grown-up Briony (Romola Garai) serve as nurses in London. The two sisters do not associate with each other, though Briony, who now knows that she did something wrong, spends her nights typing out her version of what happened—a version that may or may not set things right.

A number of critics have complained that the wartime sequences don't live up to the promise of the ... 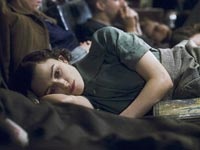