I can't be the only one frustrated with movies that make us root for characters whose unsavory acts conflict with our moral convictions. As fun as George Clooney and his associates are in Ocean's Eleven, they're still a band of thieves pulling off a multi-million dollar heist. As badly as we want Keri Russell's character to leave an abusive marriage and find a proper father for her unborn child, Waitress asks us to support an adulterous relationship in the process. And as charming and cordial as Hannibal Lecter may be in Silence of the Lambs and its subsequent films, the dude's still a murderous cannibal.

Mr. Brooks joins a long list of films and literature featuring anti-heroes. Kevin Costner stars in the title role, a loving family man with a successful business and named Man of the Year, no less. But he also carries a dark secret—he's the elusive Thumbprint Killer.

We've heard the story before: The seemingly well-adjusted family man living a heinous dual life. But what if I told you that Brooks isn't evil exactly? That he doesn't kill for fun? What if, for him, it's an addiction? And what if he's honestly trying to leave his murderous past behind him, doing his best to protect his family from such a shameful, horrific secret? Mr. Brooks may be about a killer—and it certainly has its fair share of suspense and violence—but at heart it's a movie about addiction (of the worst kind) and the struggle to overcome the temptations of sinful nature.

Skeptical? I would be too, but the film pulls it off in its execution—er, that is, implementation.

The movie begins in darkness with the whispered words of Brooks … fervently praying The Serenity Prayer in bed. Reinhold Niebuhr's prayer is familiar to members ... 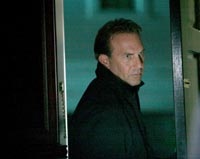