To call the town of Falfúrrias, New Mexico, population 73, off the beaten path is a colossal understatement. The tight-knit Latino and Native American farming community is isolated in the high desert with only a nondescript dirt road pointing the way into town. And so, it is a bit of a surprise that one of the finest restaurants in the state should be found in so unlikely a place. Too bad no one knows about it.

Isidor ("Izzy") Navarro is the proprietor of that restaurant, Tortilla Heaven. He is also the town's token heathen. While the rest of the community, including his pious wife and son, attend mass at the church across the street, Izzy busies himself with preparing food for the inevitable lunchtime crowd. Frustrated at some unruly dough, Izzy throws it onto the grill with a blasphemous curse. As if in response to his sacrilege, the tortilla begins to burn in a truly astonishing way. Before our eyes, the face of Jesus Christ appears. At first, Izzy doesn't see it; sometimes we're too caught up with life to notice genuine miracles taking place right beneath our noses.

When Izzy does discover the tortilla, he tries to keep the miracle a secret. But secrets have a way of getting out, and before long the entire town is beating down his door—not to eat his food, but to get a glimpse of his gastronomic marvel. Izzy, who only scrapes by, has a revelation: he can make a fortune from this miracle. Charging three dollars a head ("One dollar for the Father, a second for the Son, and a third for the Holy Spirit") his poor friends gladly pony up. 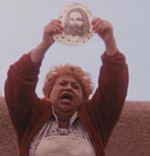 Word of the miracle spreads. In scenes evoking the closing moments of Field of Dreams, pilgrims begin streaming in from all over the state to gawk at the tortilla. Izzy is forced to build a shrine and can barely keep up with all the visitors to his restaurant. Soon, other wondrous events begin to be attributed to the tortilla, including a crippled boy who suddenly can walk, and the resurrection of a beloved pet. But to Izzy, the biggest miracle of all is his bulging wallet.

When glaringly out of place city slicker Gil Garcia (who may not be what he appears to be) shows up billing himself as a management consultant, agent, and attorney-at-law, everyone can see his only interest is in making a fast buck. Everyone, that is, except Izzy, who is already too blinded by his own greed. Before long, Izzy has signed on the dotted line, and a merchandizing juggernaut of T-shirts, mugs ("Have Jesus with your coffee in the morning") and buttons is launched. Everyone becomes caught up in the hoopla; the church now stands empty. As the money begins rolling in, all the residents try to claim the tortilla for themselves. The mayor wants to use the proceeds to build a municipal golf course to attract tourists, while the priest insists "Jesus Christ is the registered trademark of the Roman Catholic Church."

It isn't long before Izzy is in way over his head, having alienated his own family and run roughshod over his steadfast friends, who are now at each other's throats. Tortilla Heaven has become Tortilla Hell. When the fate of Falfúrrias itself is in doubt, Izzy must rediscover what truly matters in life—monetary riches … or the wealth of his friends and family.

Inspired, incredibly, by a true story, Tortilla Heaven is a modern-day fable, a sort of biblical parable couched in comedy. While a fable is an amusing and compelling way to relate a story with a serious point, Tortilla Heaven at times undermines its message by stretching the comedy to its limits. An over-the-top courtroom battle and a child custody fight with a nudist hermit veer the film into the realm of the absurd far too often. Tortilla Heaven comes very close to becoming a parody of the true movie the filmmakers wanted to make.

Tortilla Heaven is a low-budget, independent production, and, most of the time, it looks the part. For every bit of genuinely beautiful cinematography, there is another sloppy, amateur-hour moment. Much of this had to do with the constraints of the budget. The filmmakers fought for every penny of the production, shooting the film for free in churches and homes throughout the Southwest.

Filming on location instead of on sets does certainly have its advantages. The town of Falfúrrias feels deliciously authentic, and conveys a real sense of place. It is the sort of town where pink adobe homes shimmer beneath an azure blue sky; where a sunrise can be a religious experience; and where soft, dappled light streams through rooms decorated with pastels and peppers.

Much of the film's appeal has to do with the likeability of its delightful cast. The Latino and Native American community is so richly presented that, at times, Tortilla Heaven almost feels like a foreign film.

Spiritually speaking, the film certainly pushes the envelope, though I never really felt it crossed the line. You know you're watching a movie that skirts the razor's edge when in the opening minutes a pig manages to make its way into the church and drink the holy water! Although Tortilla Heaven is undeniably irreverent at times, it does so rather reverently. The film has a loving sense of self-referential mockery, the sort of humor made by and for a community of faith.

Tortilla Heaven opens with the hymn "Holy, Holy, Holy," sung as the town heeds the call of church bells one bright Sunday morning. This is a devout community that believes in the power of worship, prayer, and God's ability to reach down from heaven and touch our infirmities.

In the film's most beautiful sequence, we cannot help but be reminded of the sacramental nature of food: as the priest conducts the Eucharistic liturgy, we continually cut back to Izzy in his kitchen, preparing the meal the community will soon consume. Continuing the theme, the film ends with a scene that cannot be interpreted in any other way than an outpouring of manna from heaven. But if you're looking for the ultimate film that uses the idea of food and the communal banquet as a sacramental metaphor for forgiveness, redemption and grace, check out Babette's Feast.

While Tortilla Heaven certainly is suffused with religious themes, it is, nonetheless, overtly critical at times, leveling cinematic charges at the community of faith. The local priest, Father Pancracio—a sort of comic version of Amadeus' Salieri—comes off little better than Izzy, interested only in building a bigger church and populating it with religious trinkets. When Izzy, at his lowest point, comes begging for forgiveness, Father Pancracio tells him he will burn in hell for his sins and banishes him from the church. Though they eventually reconcile, there is never any sort of recognition on the minister's part that his actions were repugnant. In Tortilla Heaven, the real saints are found among the laity, not the clergy.

For all of its flaws and shortcomings, Tortilla Heaven can't help but be charming and undeniably entertaining. The film's heart is always in the right place. Ultimately, it is a story about community, redemption, transformation and faith. And Hollywood could always use a lot more of those.

Tortilla Heaven is rated PG-13 for some nudity and sexual content. The inexplicable "sexual content" amounts to little more than a pair of kisses between a teenaged couple and a husband and wife. The few instances of nudity are brief, are never frontal, and are, for the most part, the sort of thing one sees on primetime television these days. What might be more troubling to viewers is that the Lord's name is taken in vain throughout the film. This occurs, ironically, only when a character is addressing or referring to an image of Jesus Christ.