"You are such a nerd," says Mary Jane to Peter Parker.

In most movies, that would be a put-down. But Mary Jane, played again in Spider-Man 3 by the radiant Kirsten Dunst, says it with such affection that she's sure to reclaim her title as the ideal woman for generations of nerdy, male Spider-fans.

And Peter Parker, who still seems like a starry-eyed adolescent even though he's played by 31-year-old Tobey Maguire, is still madly in love.

But not madly enough, apparently. Here we are in the third film of director Sam Raimi's spirited Spider-Man franchise, and the audience is ready to hear wedding bells. But Peter seems to have forgotten how lucky he is to have such an intelligent beauty reclining seductively in his web. Remember that sexy kiss they shared in the first film? Peter's dumb enough to reprise that famous inverted lip-lock … with somebody else this time.

Clearly, Peter still has a lot of growing up to do. But who has the time to mature when more and more supervillains are arriving on the scene all the time?

Spider-Man 3 explores the latest chapter of Peter Parker's education in the balance of power and responsibility. In the first film, he was exhilarated by newfound talents, and learned to use them for the greater good. In Spider-Man 2, he felt the burden of responsibility, and considered tossing the mask aside and living a normal life. This time, Spider-Man's brought crime to a standstill and become the most popular celebrity in New York. But pride comes before a fall, and when you're swinging between skyscrapers, that's a very long fall indeed.

To be fair—Spider-Man doesn't just fall. He's pushed … by a variety of malevolent influences. The "3" in the movie's title may well be referring to the number ... 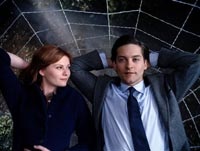