In the audience's first sweep through I Am Legend's deserted, overgrown and devastated New York City, Robert Neville (Will Smith) drives past a truck with the same poster plastered over it several times. It reads, "God still loves us."

At first, it seems this may be an ironic jab. After all, this is a dark, apocalyptic film about one man left to rot in a seemingly Godless world. But by the end, that poster seems to be a subtle thesis statement.

This is the third major film incarnation of the 1954 horror novella I Am Legend by Richard Matheson (writer of The Twilight Zone: The Movie and several sci-fi/horror stories). Considered a horror classic, it has influenced writers including Stephen King and films such as Night of the Living Dead, but its track record on film isn't as impressive.

The most well known version is the dated and goofy The Omega Man (1971) with Charlton Heston. Like that film, I Am Legend is more "inspired" by the book than a cinematic re-telling. The filmmakers weave their own story and themes (including all of the spiritual content) out of the book's basic premise that a virus has decimated the Earth. And only one man seems to have survived its effects.

The film begins with the TV news. A doctor (an uncredited Emma Thompson) explains how her team was able to mutate the measles virus. She tells the news anchor that measles is like "a fast car with a madman at the wheel" but her team believed it could be used for good if "a cop were driving it instead." And so, they mutated the virus and turned it into a successful cure for cancer. Flash forward three years: that mutated virus has killed 90 percent of the population and turned most survivors into Darkseekers—pale, hairless, zombie-like predators who feast ... 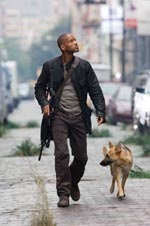