A woman on the edge of despair, abandoned by her husband.

Her two sons—a teenager toying with crime, and a youngster glued to the television.

A young Mohawk woman in trouble with her tribe, who is losing her eyesight and grieving for her lost child.

And a vast, frozen river that may as well be marked with a flashing neon sign: "SYMBOL! SYMBOL!"

Yes, Frozen River has everything you'd expect to find in a winner of the Sundance Film Festival's Jury Prize. It has tormented characters, "gritty" performances, cultural commentary, and a powerful sense of place (upstate New York, the St. Lawrence River, a Mohawk reservation). And while all of these elements are impressive, they fail to cohere into a satisfying whole.

Courtney Hunt's film is about the many trials of Ray Eddy (Melissa Leo), whose husband Troy has absconded with the family's down payment for their soon-to-be-delivered doublewide home. Running out of money, Ray becomes desperate for a promotion at her Dollar Store day-job. She needs to put something better than popcorn and Tang on the dinner table for her two boys, T.J. (Charlie McDermott) and Ricky (James Reilly). Their family dreams look likely to crumble.

As if things aren't bad enough—T.J.'s favorite toy is a blowtorch, and he's involved in a credit card scam. And little Ricky dreams of finding a fancy set of Matchbox cars under the Christmas tree so that he can stage spectacular collisions.

Ray's furious pursuit of her husband leads her into an unexpected partnership with Lila Littlewolf (Misty Upham), a distraught Mohawk woman who makes quick money by smuggling foreigners across the border from Canada into the U.S. Lila's got ...

Join in on Facebook
Tags:
None
Posted:
August 1, 2008
More From:
Jeffrey Overstreet 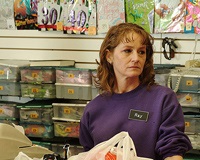