Christian filmmaker Buzz McLaughlin tries to find a niche between secular movies and preachy ones—only to find it's an elusive market.
Frederica Mathewes-Green|December 2, 2008

In the independent film The Sensation of Sight, Oscar nominee David Strathairn plays an introspective English teacher who feels himself complicit in a tragedy, and then begins selling encyclopedias door-to-door to the locals. But his anxieties begin to consume him as various characters and dreamlike situations increase around him, ultimately pushing him toward an unexpected awakening.

It's sort of a strange synopsis for a "Christian" movie—which it isn't. The filmmakers behind Sight—which hit the international festival circuit before a limited U.S. theatrical release earlier this summer—are Christians, but they didn't want to make a distinctively Christian movie.

But they didn't want to make an entirely secular one either, opting to include themes of faith and redemption in the story in more subtle, intelligent ways, instead of being preachy and/or didactic.

Executive producer Buzz McLaughlin and director Aaron Wiederspahn formed Either/Or Films—named for a book by Soren Kierkegaard—a few years ago "for the purpose of developing and creating films of beauty and artistic excellence that provoke the public to engage with the providential mystery of grace," as their mission statement says.

Frederica Mathewes-Green of CT Movies caught up with McLaughlin at a conference in New Hampshire recently, and their conversation about finding a niche in the film business was fascinating—especially as the two filmmakers ran into outright hostility from industry insiders who even suspected that they might be men of faith.

The Sensation of Sight is the first movie from Either/Or Films. How did you come to form the company?

Buzz McLaughlin: I met Aaron some years back in Orlando, when he produced a play of mine; ... 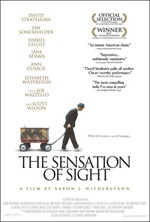