Doubt is a bundle of questions, chiseled to a point and encased in the trappings of a Catholic church era now nearly forgotten. It boasts one of the finest leading casts this year—seventeen Oscar nominations between them—and some heavy, yet relevant source material. Based on the Pulitzer-prize winning play, this Doubt was re-written for the screen and directed by its playwright, John Patrick Shanley.

The year is 1964, and Sister Aloysius (Meryl Streep) is the principal of St. Nicholas Church School, a Catholic grade school in the Bronx.  Sister Aloysius hovers hawk-like above the school, swooping in as an agent of wrath to punish wayward students via a well-timed smack to the crown of the head. She watches over the other nuns in the parish—including sweet, naïve eighth grade teacher Sister James (Amy Adams)—but it's unclear whether her care is borne of respect, or a preservation instinct for the parish's vanguard. 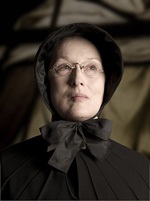 On the other hand, Father Flynn (Philip Seymour Hoffman), pastor of the St. Nicholas parish, is a man of his time—which, not accidentally, is that of the Second Vatican Council—and a proponent of a kinder, friendlier church, one in which love and kindness prevail over fear.  "Doubt can be a bond as powerful and sustaining as certainty," Father Flynn preaches to his congregation, scandalizing Sister Aloysius, to whom doubt is equivalent to sin, or at least a questionable weakness of character. He exhorts his congregation toward tolerance of one another and away from gossip, and teaches the boys to shoot a free throw, wash under their fingernails, and not take it too seriously when girls don't want to dance with them.

One day, Sister Aloysius spots something that affirms her already-entrenched suspicions about Father Flynn. When Sister James later approaches her with a hesitant unease about the relationship between the priest and a young boy in her class—the first black student in the school, who has trouble with both bullies and his father—that hunch seems confirmed. Without a shred of evidence but convinced by her own certainty, Sister Aloysius sets out on a campaign to oust Father Flynn, but it's not without consequence—to herself, to Sister James, to the student in question, and to the parish.  The line between what is right, who is justified, and what has happened becomes less certain as it is more closely examined. 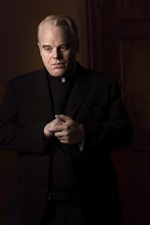 Watching Doubt, you might imagine that it's really a backhanded commentary on something contemporary—politics, religion, or another topic du jour—which simply underlines the fact that doubt, manipulation, and tension toward authority are part of the human condition across temporal barriers. Doubt not only plays with questions about misgivings, certainty, and the lines between the two, but also confronts deeper issues of authority and its proper subversion, as well as whether wrongdoing is ever okay, if it's in the service of a greater good. These ideas are just as resonant in your hometown today as they were in the Bronx in 1964.

Films adapted from plays almost always betray their roots to bad effect, and the action often becomes boxed into a few rooms and excessively talky, with obvious breaks in action, remnants of the limitations of the stage. Doubt was a play of Spartan proportions—four characters, and few scenes with more than two actors—and luckily, it's shifted from stage to screen with a little more success. There's still some imaginary theater bounding-boxes, and since everything is discussed but little is shown, the added bodies in the film function more as stage pieces than actual three-dimensional humans, but the story moves around, and as a whole, works onscreen. 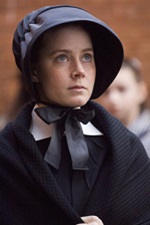 The flaw in Doubt, which likely stems from its stage roots, is that it throws its symbolism around too heavily (in fact, the theatrical version's subtitle was "A Parable"). A cat's about to find the mouse in the house; rainstorms repeatedly beat down on characters at the moment they experience spiritual turmoil; a stained-glass window with an all-seeing eye watches over the hallway; windows are continually found cracked open; and Sister Aloysius grimly welcomes a visitor to her office with device for screwing light bulbs into ceiling fixtures, simultaneously reminiscent of a triton-bearing sea king and a certain darker entity with a pitchfork. The less-than-subtle parallels seem not to credit the audience with much perception.

But this doesn't diminish the film's triumphs too much. Cinematographer Roger Deakins apparently hasn't set down the camera this year—his other 2008 releases include the beautifully shot movies The Reader and Revolutionary Road—and at this point I'd happily watch grass grow, as long as he was behind the camera. Doubt, with its black-clad figures set against rich greens, blues, and brick reds, is exquisite in its simplicity. This is a period piece, set in a distinctive time in the Catholic church when nuns wore Victorian-style bonnets and ate in silence while the priests dug heartily into a raucous dinner, and Deakins' stills of this time could be framed and hung in a museum alongside the Dutch masters.

Amy Adams is the weakest member of the cast, not because she's a poor actress but because she is once again playing Amy Adams—I hope she's given the opportunity to break out of the doe-eyed role soon. On the other hand, Viola Davis, in a riveting turn as the student's mother, has only one scene, but it turns out to be the moment where the foundations shift, and she works in emotionally stunning contrast to Sister Aloysius.

We've seen the protean Hoffman play scary, brilliant, creepy, lovable, and pathetic before, but this is one of his most likeable characters. Here he gets to play someone that, depending on your opinion of his honesty, might embody all of those, that swings between kind benevolence and anger—for either his reputation, or for righteousness's sake. But despite his firm standing in the upper echelons of contemporary actors, he's not quite a match for Streep here. She's a bit like that symbolic cat—prowling for one wrong move, hissing and spitting and snarling, with unblinking eyes and a taste for blood—but this guise is stretched so thinly over a concealed vulnerability that cracks are beginning to show, and those moments are startling for how they challenge what we believe about her character.

Doubt is not going to please some moviegoers. True: the symbolism is a bit heavy-handed. True: not a whole lot actually happens onscreen. True: it's a little infuriating to be left scratching your head about what really went on. But to the engaged viewer, Doubt brings assumptions about people and circumstances to the surface, and then challenges those assumptions with uncertainty and, yes, doubt. Nobody loses, but nobody wins, either.

Doubt is rated PG-13 for thematic material. The story deals with implied pedophilia and homosexuality, but nothing is shown and the characters talk very obtusely about these subjects, so they're mostly troubling in light of more recent church scandals. While there's little subject matter that's patently offensive, the themes are inappropriate for younger children, but it would make good discussion fodder for older teens and up.