Klaatu, the alien at the center of The Day the Earth Stood Still, is still very much a Christ figure in this remake, says director Scott Derrickson.
Peter T. Chattaway|December 12, 2008

As a writer, Scott Derrickson has worked on all sorts of movies, but as a director, he has been working his way up the Hollywood ladder in leaps and bounds. His first film, Hellraiser: Inferno, was a straight-to-video sequel, and his second, The Exorcism of Emily Rose, was a modestly-budgeted hybrid of the horror movie and courtroom drama genres that did surprisingly well at the box office three years ago.

Derrickson (right) on the set with Keanu Reeves

Now he has directed his first tentpole picture, a big-budget studio movie with major movie stars and pricey special effects—and it's a remake of a universally loved sci-fi classic, to boot. The Day the Earth Stood Still stars Keanu Reeves as Klaatu, the alien who comes to Earth to give us a warning, and Jennifer Connelly as the scientist who sort of befriends him—though not without some difficulty, at first.

Derrickson—who has often talked openly about his Christian faith—spoke to CT Movies about the film from his hotel room in New York City.

Note: Some of this interview includes mild spoilers about the film, but nothing major that isn't already implied or shown in the trailer.

Your last film was your own project, initiated by you, whereas the studio had been working on this film before you came onboard. What was it like to work on someone else's story, especially something this big?

Scott Derrickson: It's a different experience than generating something yourself. I think there's a good and bad side to it. The bad side is that you never feel quite as connected to the material, and you're sculpting something from something that someone else did, much more than you're continuing a process that started from the beginning with yourself and your own ideas. And that becomes a challenge. On the positive side, it's easier to be more objective about things, and to not feel quite so personally attached to everything. You can be a little bit more open to ideas that way.

In the past, you've talked about horror films, and your last two films were also horror films. Is it fair to call this a horror film in some ways?

Derrickson: I don't know that I would. I've got too much respect for the horror genre to classify this as a horror. In sci-fi, horror is definitely a subgenre: The Thing belongs in that genre, and Event Horizon, and Alien, and Pitch Black. Those are sci-fi horror films in a way, and even Pitch Black is probably more sci-fi action. But I think this would probably classify more in science fiction thriller drama. I think it's kind of a hybrid of those three genres.

The swarm destroys all in its path

It certainly has the swarm, as it were, sort of like the classic insect movies, and there is also the apocalyptic angle.

Derrickson: Yeah, there is definitely that. And the fearful apocalyptic tension aspect of it. Where is the line between horror and thriller? There's definitely tension that's intended in the movie, and every time I've seen it with an audience, I can feel a certain tension to the experience, and people are feeling the anxiety of the sequences where they should. And that's a good thing. So it's intended to be less intense than horror, certainly, but still have the tension that you want from a good thriller.

This film also has a much higher death toll than the original. It's not just the robot Gort, but also Klaatu, actively smashing military vehicles, and it's not just military types who die. Has that made the film morally murkier in a way?

Derrickson: The movie is morally murkier, because the times are morally murkier, and there was a lot of thought and discussion that went into each one of those decisions. Gort is definitely an extension of Klaatu. He's a machine that activates in the presence of violence, but it's one of the problems I think that the original film never really resolves.

As much as I love the original, the one thing that I've never been able to unpack is the very end of the movie. Because at the very end of the movie, this very peace-loving Klaatu, who's in the middle of what feels like this anti-war movie, stands in front and delivers this speech about how it's up to you, and then the big closer is, "And if you don't do exactly what I'm telling you to do, then I'm going to send this giant robot back and he's going to kill all of you!" That's why the film has been accused of being fascist by some people, and there's a contradiction in that that I find unresolvable, frankly.

So in this film, I don't think there's a contradiction or a conflict in terms of how Klaatu comes with this mission: To assess human nature, to get his report, and having gotten all that information, make his decision. And when he makes his decision, he makes the decision based on what he believes is predictable about human nature.

And Klaatu is not the one who is usually killing people. The one time he does it, with the helicopter pilots, he does it as an act of self-defense. He's wired into them and we hear the line, "You're a go to take out the target," and it's not until that moment that he decides to do what he does. But then when the trooper is in his way, and the trooper is going to stop him from completing this process, he stops the trooper but then he heals the trooper, because he knows that the trooper wasn't going to kill him. So he is conflicted, and when Jennifer Connelly [as scientist Helen Benson] sees that, she realizes there is something in him. 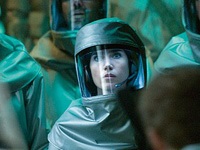 Think of it this way: there are moments that we are completely fine to smash a bug, and then there are moments where we feel very strange about it and want to take it out and let it go free. I think that he's a little bit like that, at that point in the movie, until something breaks through and he realizes, Wait a minute, these aren't just bugs, there is something more here, and he feels it, he sees it, he understands it, and suddenly the value of humanity goes to a level that far exceeded what he ever expected to feel.

That segues into something else—the contrast between this film and the original, in terms of the Christ-figure aspects. In the first film, Klaatu dies and rises again, whereas here, that never happens to him, but in the scene with the trooper. Did the trooper die, or was he merely hurt really badly?

Derrickson: He was dead. I mean, we tried to give him the nice dead open eyes, and of course Jaden Smith [as Helen's son Jacob] is yelling, "You killed him! You killed him!" But we definitely had the idea that he was dead. So that's the Lazarus moment, I guess.

Klaatu doesn't seem as much like a Christ figure here the way he did in the first film; he also doesn't call himself "Carpenter," that sort of thing.

Derrickson: I would argue against the statement that there is less of a representation of him as a Christ-figure. The first Keanu [Reeves, as Klaatu] we meet has the stigmata mark on his hands, and [the second Keanu] walks on water when he goes to touch the sphere. And most importantly, for me … I don't know if anyone is going to catch this, but I really wanted, in updating this and preserving this Christ allegory, I wanted the allegory of the atonement, of what really matters about the Christ story, that he does die the sacrificial death and literally takes these "aphids," as we called them, from inside the two characters at the end. He takes that upon himself and then goes and dies, and then when he leaves, Jacob makes the comment, "He's leaving." He's not dead, and that's the ascension, and I was very conscientious of those allegorical images being in there, just being kind of fresh and interesting.

I noticed the walking on water, but it didn't register so much, because the camera cut to a tighter angle fairly soon, and I wasn't sure if it was simply really shallow water, or if he actually was …

Derrickson: And that's deliberate. But again, it's one of those things where part of the thing I was trying to play with was to not make those things too obvious. The choice not to put "Mr. Carpenter" in there had something to do with that. I find that to be a little blunt, and there is something very 1951 about that one. I just felt like it didn't have a good place in the story the way it was conceived. 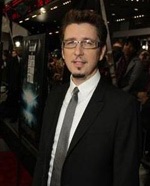 Derrickson at the premiere

Is it fair to call you a post-modern filmmaker? Emily Rose questioned the rationalist, modernist assumptions that some people have about things, and in this film, there's a very interesting line where John Cleese says to Jennifer Connelly, "Don't persuade him with your reason, but with yourself." And there is sort of a setting of reason to the side, in favor of something else, call it experience or what have you. Is there a thread there, running through your films, that you can comment on?

Derrickson: I think so, and I went way out of my way to legitimize science in this movie. That line came from the lips of a theoretical physicist, and the math equation that they're doing on the board is a real equation, it's one of the math questions that a real theoretical physicist would want an answer to if they were to meet an intelligent being from outer space. The science in this movie is legitimate science, and yet I love the idea that this brilliant scientist [Cleese as Professor Barnhardt] recognizes the limits of science when it comes to persuasion, to understanding, to meaning.

And having made his argument to Klaatu—a very rational argument, that only on the brink do we find the will to change, only on the precipice do we evolve—[Barnhardt] saw the impact that that had. But he realized that for Klaatu to reverse his decision, it's going to have to come from an understanding of what it means to be human, and what it really means to be human cannot be contained or defined by science alone—and that's the commission that he's giving her in that moment. And there is something post-modern about that, most definitely, and it is how I feel.

Read a CT Movies interview with Derrickson from 2005 here.

1 of 4
Derrickson (right) on the set with Keanu ReevesThe swarm destroys all in its pathJennifer Connelly as Dr. Helen BensonDerrickson at the premiere