Movies often go into production years before they hit the theaters. So it's unlikely that when the makers of Seven Pounds could have predicted the economic crisis that would be facing the moviegoing public when they released their film. If they had, they might have thought twice about sending their bleak tale of remorse and death out into the world at this moment. A little Hollywood-style escapism seems in order, no?

That said, it's hard to imagine that even the roundest days of the housing bubble would have made the audience more amenable to this muddled story of one man searching for redemption in the wake of an automobile crash he caused that resulted in the death of seven people, including his fiancée. "In seven days God created the world. In seven seconds I shattered mine," Ben Thomas (Will Smith) tells us early on in the movie. And two hours later, that still pretty much sums things up. 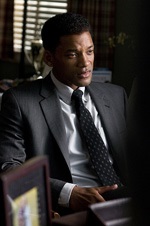 Will Smith as Ben Thomas

Seven Pounds is Smith's latest collaboration with Pursuit of Happyness director Gabriele Muccino. Both movies provide the erstwhile Fresh Prince the opportunity to show us his formidable dramatic chops and demonstrate that he can wear a suit well. But whereas Happyness was a sort of capitalistic fairytale (couldn't we use one of those about now?) that attempted to point at both the promise and peril of life, Seven Pounds shackles the viewer to a profoundly traumatized man whose perspective on life is as wrecked as the cars in the middle of the road that tragic night.

The narrative is maudlin, pulling out all the tearjearking stops to suck the viewer into Ben's tragic world. In his quest for redemption—a plan that involves sussing out a few good people on whom to bestow gifts—Ben connects with a neglected nursing home patient, seemingly rescues an abused-but-brave mother and her children, and challenges a blind, sad sack of a salesman named Ezra (Woody Harrelson) to ask the waitress he's pining for out on a date. (This exchange elicited the best line in the movie when Ezra says, "I don't think she sees me.") Ben's own romance with Emily Posa (Rosario Dawson), a woman who will die without a heart transplant, goes from "Hello," to "What if we had children?" in an absurdly short period of time. It's as if the specter of death is meant to stand in for plausibility at every turn.

But death does quicken the breath and the heart. Good drama can be made of these things—maudlin or not. The fatal flaw of the movie is this: Insofar as Seven Pounds aspires to present a picture of a kind of spiritual redemption, it reveals a profoundly misguided idea of redemption. It's tricky to discuss this issue with any specificity without revealing the answer to the movie's central question—whether or not Ben will kill himself. (The film opens with him calling 911 to report his own death, so it's not spoiling anything to say that the movie revolves around his planned suicide.)

But in the wake of Ben's decision, the audience is left with more questions. The gifts Ben gives away seem pretentious and even selfish, despite his seeming willingness to go so far was to forfeit his own life if it will benefit the lives of others. It's an impulse that seems noble on its surface, but is deeply problematic when examined with even the slightest rigor. And so the movie appeals directly to the emotions and the tear ducts but bypasses the mind (Who needs plausibility?). And in doing so it, becomes manipulative. Which is a shame, because the story of a man who is at least willing to consider self-sacrifice in a quest for redemption has a lot of potential.

Seven Pounds is rated PG-13 for thematic material, some disturbing content and a scene of sensuality. Very little skin is shown when Ben and Emily sleep together. There are flashbacks to a violent car crash, and one difficult death scene.