Be warned: Waltz With Bashir is not the kind of cartoon you see for entertainment. It's heavy and difficult. It lays out the tragedy and horror of war through the lens of one man's confused experiences. The feature-length animated documentary lives somewhere on the border between dream, reality, and a yellow-hued nightmare, and while it explores the horrors of war, it plunges deeper to feel out the damaged human psyche.

Many Americans—like me—are ignorant of the Lebanon War, the Israeli role, and the specific events surrounding the refugee massacre that followed in the early 1980s. This film not only provides a good historical perspective, but also grapples with the fallout in the lives of those who experienced the war, twenty years afterwards. Waltz With Bashir layers complexity into its subject—the good guys are not wearing white hats—and yet, it pulls no punches on exposing the atrocities, ugliness, and destruction of war. Fingers point in all directions. There's a clear moral judgment about what is right and wrong, but the people involved don't necessary fall into easy categories.

Israeli director Ari Folman is visited by a friend who experiences a recurring nightmare, in which twenty-six dogs chase him through the streets of Tel Aviv—dogs, he realizes, he was forced to kill during the Lebanon War to avoid ruining the element of surprise. Folman has submerged his own memories of the war, and cannot remember anything except a vague dreamlike memory of floating naked in the sea with two friends, then approaching a group of wailing women within the city. His friend suggests that making a film about his journey to remembrance might be cathartic.

Folman seeks out the friends in his memory and slowly ... 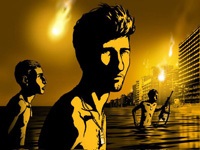