The Children of Huang Shi is a bit of an odd duck for a summer release—a thoughtful, true-life historical drama tucked conspicuously into a season of explosions, guns, computer generated monsters and invincible superheroes. That it will be lost among the thunderous cacophony is a foregone conclusion. That it deserves to be is, perhaps, the only surprise.

George Hogg (Jonathan Rhys Meyers) is a young, wet-behind-the-ears British reporter who sees his big break when the Japanese invade China in 1937, brutally subduing the population. Managing to get behind enemy lines, he begins documenting the apocalyptic destruction of the city of Nanking and the mass execution of its residents. It isn't long before George is captured. At just the moment when it appears his head is to be separated from his body, the cavalry appears in the form of Chen (Chow Yun-Fat) and his fellow communist insurgents.

Chen, an engineer whose expertise is in constructing buildings, now finds himself blowing them up to prevent their use by the Japanese. He introduces George to Lee Pearson (Radha Mitchell), an American Red Cross medical worker who suggests George hide out in a children's orphanage in the rural village of Huang Shi to recover from wounds he's incurred.

The disinclined George finally acquiesces to her suggestion, but, upon arrival, finds the community in tatters. The boys, whose only adult supervision is a harried cook, have reverted to an almost feral state, more savages than children. George's presence is greeted with hostility, especially by the orphanage's alpha male, Shi-kai (Guang Li), who does everything he can to make George's stay intolerable. George perseveres and gradually begins winning the children's trust. As he adjusts to his ... 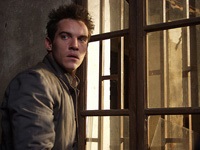