Famous for his ever-present monocle and long cigarette holder, the Austrian filmmaker Fritz Lang was termed the "Master of Darkness" by the British Film Institute. Lang's movies were a huge influence on the film noir style, and the darkness and chiaroscuro of his films may have had something to do with the dilemma of his religious heritage.

His mother was born Jewish, but later converted to Catholicism. Lang's father was a lapsed Catholic; they raised young Fritz in the Catholic faith. Lang often said he was raised Catholic and "puritanical," although his observance of his religion later in life, beyond mere lip service, is in doubt among his biographers. Notably, Lang would flee Germany in 1934 as the Nazi government was becoming more and more powerful—partly because he abhorred anti-Semitism, and, some speculate, partly because he feared the Nazis would learn of his partly-Jewish roots via his mother.

Born in Vienna in 1890, Lang first encountered anti-Semitism and fascism in the religious school he attended a decade later. He paid little attention to these trends and spent his time reading the likes of Schopenhauer, Kierkegaard, Nietzsche, Schiller, Goethe, and Shakespeare. The strict puritanism of the school introduced him to the Madonna/Magdalene dichotomy in viewing women: they were either chaste or sinners. His own family heritage (his grandmother had become pregnant before wedlock) helped underscore this thinking in his worldview. As one biographer puts it, "Tales that taught the pitfalls of love and sex—featuring respectable men ruined by lusty temptresses—would predominate throughout Fritz Lang's career; a blend of eroticism, violent crime, and the supernatural."

Lang traveled the world after school, ... 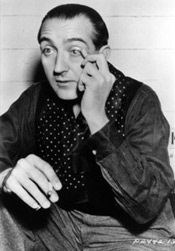