Evolve or die—that is humanity's dilemma as Battlestar Galactica enters its final season. It's a familiar concept to those who devoured Eckhart Tolle's Oprah-baptized The New Earth, a compelling, winsome song of freedom that appeals to our inner survivor. If we marshal our resources, we can leave all our cares behind. We may even transcend death itself. But Galactica dares to suggest that freedom isn't what we might think it is.

Last season, a small remnant of humans followed President Laura Roslin (Mary McDonnell) to Earth; they were promised a solid home after years of fleeing the relentless Cylons through space. Instead, they landed on a radioactive wasteland, their hope shattered by the caprice of the gods who led them there.

Despite tenacity, resilience, and spirit, mankind has failed. Humans are just too weak, too vulnerable, and too mortal to endure. By contrast, the Cylons have superhuman strength, a boundless army, and, most importantly, the power to resurrect. Upon death, a Cylon's consciousness simply downloads into one of the many bodies housed in the resurrection ship.

The Cylons achieved their power by evolving from robot slaves into sentient beings. Now, in this season, it seems that the humans' only chance for survival is to mimic their enemies and evolve out of their frail humanity. If possible, they will become Cylons themselves.

But a small faction of Cylons has chosen a different path, siding with the humans against their own kind. They destroyed their own resurrection ship, rendering themselves powerless to download into new bodies. Their Cylon cohorts can't fathom such a senseless de-evolution—nor can the humans.

"To live meaningful lives, we must die and not return," explains Cylon Natalie (Tricia ... 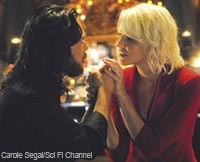