The king of raunchy comedy makes a movie about comedy—and about death. But it's overly ambitious, and in the end, a bit of a sprawling mess.
Josh Hurst|July 31, 2009
Our Rating

Is Judd Apatow a great director? No—not yet, anyway—but it's becoming increasingly clear that he wants to be. His first two movies, The 40-Year-Old Virgin and Knocked Up, introduced a surprisingly clear and original voice to the world of raunchy, R-rated comedy. His third, Funny People, is something else entirely: It's nothing if not a play to win more respect as a filmmaker, something that's seen in its darker, more mature themes; its complex, multi-faceted plotline; and its epic run time. Indeed, at two and a half hours, Funny People might as well be the Lawrence of Arabia of summer comedies, a comparison that's all the more apt given the movie's two clear, distinct acts.

The ambition is hard to deny, and it's made vivid when you consider Funny People in light of other, similar-minded summer comedies. This movie is many things, but it is not typical. For one thing, it is a comedy about very dark things—though that's not quite the same thing as calling it a dark comedy. Mere minutes into the movie, we learn that its protagonist, stand-up comedian turned big-time movie star George Simmons (Adam Sandler, playing a fictionalized version of himself) has a rare blood disease, and probably very little time left to live. Simmons' sprawling L.A. mansion is filled with fast cars, award statuettes, and posters from all his blockbuster movies, but terminal illness throws everything into perspective. He embarks upon a therapeutic standup tour where he delivers uncomfortable and bleak jokes about death—which leaves his audience, as well as we in the theater, more than a little unsettled. Yet, despite a few genuinely disturbing moments, Funny People is not a black or difficult-to-watch film: Apatow's signature ... 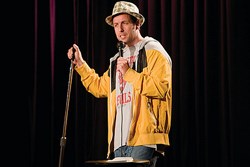