It's hard to imagine any parent sitting through Orphan without looking away—or walking out. The story of a family whose adoption of an older child goes horribly, horribly awry doesn't pull any punches when it comes to jeopardizing children, both the characters and the actors playing them.

Vera Farmiga (The Departed) and Peter Sarsgaard (The Mysteries of Pittsburgh) play Kate and John Coleman, a married couple who suffered a stillbirth with their third child. Kate, a recovering alcoholic, still grapples with her grief, but John is ready to move forward on adopting. During their visit to a girls' home presided over by Sister Abigail (CCH Pounder), they find themselves smitten by Esther (Isabelle Fuhrmann), a nine-year-old Russian orphan with an archaic manner of dress and impeccable manners.

Esther's homecoming isn't as smooth as John and Kate would like. While their deaf daughter Maxine (Aryana Engineer) takes to her new sister immediately, older Daniel (Jimmy Bennett) thinks she's weird. Kate and John chalk it up to the normal tensions after adoption, and work hard to make Esther feel welcome.

But questions are raised after a girl who bullied Esther ends up with a broken arm, claiming Esther pushed her off a play structure. Kate has her doubts, and a phone call with Sister Abigail brings up some troubling incidents from her past. It seems that no one knows much about Esther's past, except that the last family who adopted her ended up dead in a house fire. Esther was the only survivor.

While Kate grows more and more suspicious, not to mention fearful for her other children, John becomes Esther's champion. Their marriage grows fractured as old wounds rear their ugly heads, and Kate's grip on reality comes under scrutiny—and ... 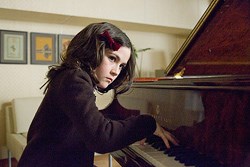