A boorish man gives an uptight woman tips on catching a man in this "romantic comedy" that is rather ugly but, despite the title, rings very false.
Peter T. Chattaway|July 24, 2009
Our Rating

It takes a certain amount of guts—or maybe just cluelessness—to give a movie a title like The Ugly Truth. If the movie is even remotely disappointing, critics and audiences alike are going to make obvious wisecracks along the lines of, "It's ugly, and that's the truth." As it happens, such dismissals are more than appropriate here. Despite the fact that it features a couple of actors who have proven their worth as romantic leads, The Ugly Truth is a badly botched film on several levels, thanks in no small part to an awful script.

Where to begin? Well, let's start with the uncanny coincidences that get the movie going.

Katherine Heigl, who played an up-and-coming celebrity interviewer in Knocked Up, now plays Abby Richter, an uptight TV producer whose news program has slipped in the ratings big-time. Abby also hasn't had a boyfriend in ages, and she seems oblivious to the possibility that her control-freak ways might be scaring away the few men that she does meet. (She not only runs background checks on these guys; she discusses this with them on the first date.) One night, before going to bed, her cat steps on the remote control and Abby happens to catch the tail end of a phone-in talk show hosted by Mike Chadway (Gerard Butler), a boorish bloke who says all men are pigs and women should get used to that fact—oh, and if any female caller doesn't have a man in her life, Mike figures she's probably ugly.

Ticked off by these statements, Abby phones in to complain, but Mike's confident rebuttals just make her more upset. And then, the next day, Abby goes to work and discovers that, as chance would have it, her bosses have already hired Mike to join their morning news show—because boorish men behaving badly ... 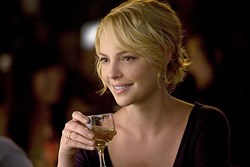