Of course it's weak on plot and heavy on cool effects, but its shameful and unnecessary elements take it far from harmless brainless entertainment.
Todd Hertz|June 24, 2009
Our Rating

Whether you think it's a good thing or not, know this: Transformers: Revenge of the Fallen is a faithful extension and escalation of director Michael Bay's first film in the franchise. In fact, it's practically the same movie—but supersized. Everything is turned up to eleven—the good and the bad.

If you liked the first, you'll probably like this. I can't say I like either Transformers film, but there's a difference between them. In Transformers, I was angry, dismayed, and frustrated. For this sequel, I might just be used to Bay's treatment by now, but I mostly just laughed with genuine amusement and shook my head in total bemusement. It's a big mess.

As the sequel begins, we learn that the Autobots have joined forces with an elite squadron of the U.S. military to form NEST, a covert group working cooperatively to fight the Decepticons. Meanwhile, Sam Witwicky (Shia LaBeouf) is preparing to leave for college. As he does, he discovers something that once again makes him a key player in the Autobot vs. Decepticon war—a war that an old enemy called The Fallen is now joining.

In the first hour, I was surprised to find a mostly sensible and reasonably compelling storyline. But the longer it goes, the further it dives into unexplainable lunacy. And it goes for a long time (2½ hours). Sometimes, it's confusing to tell what's going on—it's frequently hard to tell which bots ... 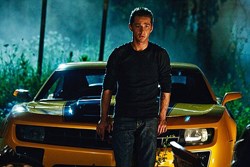