A pair of corporate spies with a steamy history conspire to pull off the ultimate con in this smart, breathlessly entertaining cinematic musing on the fragility of trust.
Brandon Fibbs|March 20, 2009
Our Rating

Film critics often use the word "fun" when referring to a movie that isn't going to turn many heads and may not be all that worthy of significant attention, yet still retains some semblance of quantitative entertainment value. Critically acclaimed films don't often involve fun—moving, sophisticated and elegant, yes, but rarely fun. So when a film appears that is whiplash smart and breathlessly entertaining, you want—to paraphrase the great Walt Whitman—to shout your review over the rooftops of the world.

Like the miniature Rubik's Cubes that two spies use to identify themselves to each other in Manhattan's crowded Grand Central Terminal, writer/director Tony Gilroy's Duplicity is a pleasurable puzzle with a vast myriad of possible outcomes. At any given time, we have no idea what's going on, but rather than becoming frustrated, we hunker down and pay that much more attention, intent on reconstructing the jigsaw puzzle before all the playful twists are revealed. However, as the title suggests, deceit is the name of this intoxicating game, and we soon realize that success is nearly impossible when the pieces never sit still.

Duplicity's opening credits sequence sets the tone for the entire film. A wide shot shows two corporate jets facing each other on opposite ends of the screen. (This mirroring, a visual pun on the word "duplicity," will be repeated throughout the film.) Clustered around both aircraft, umbrellas opened against the rain, are well-dressed business types. Two men break free from their respective groups and surge toward one another across the length of tarmac, headed for screen center. They are Howard Tully (Tom Wilkinson), the CEO of Burkett-Randle, and his counterpart at Equikrom, Richard "Dick" Garsil (Paul Giamatti). Screaming and wagging imperious fingers, the two clash at the proverbial 50-yard-line where verbal sparing turns to shoving which ends finally as a wrestling match on the sodden blacktop. The sequence, set to a jaunty piece of music, takes place in slow motion and without dialogue.

Right away, we know we will be watching something different. Different than the usual mindless pre-Spring fare. Different than the usual comedy crime thriller. This is Michael Clayton (also directed by Gilroy) meets Oceans 11, a film which taps into the depth and intelligence of the former while wrapping itself in the humor and energy of the latter. This is screwball comedy for the contemporary age—zippy, muscular language delivered fast and furious in support of a story as titillating as it is sobering.

With the Cold War thawed, ex-covert agents now make their living spying for multinational corporations. Claire (Julia Roberts) used to work for the CIA, and Ray (Clive Owen) once snuck around for queen and country in MI6. The two first met in Dubai in 2003 when Claire got the better of Ray on a case and then vanished into thin air. He's had a thing for her ever since.

Flash forward to 2009. Claire and Ray are now on the same side, working as industrial spies for Equikrom. The health-and-beauty aids giant is convinced that its direct competitor, Burkett-Randle, is on the verge of announcing a breakthrough new product, and Claire and Ray are under orders to obtain the secret formula and its potentially limitless profit. The paranoid Garsil is convinced his nemesis Tully is intent on destroying him because "that's what I would do." 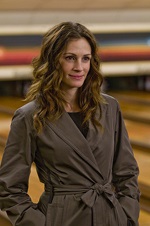 With Claire working as a double agent inside Burkett-Randle, Ray and a team of crack investigators use the latest technology and good old-fashioned gumshoe work to unravel B-R's secrets. It won't be easy. B-R's security measures rival the Pentagon's and they know Equikrom is coming for them. But are they aware Ray and Claire have plans of their own? Who is playing whom?

All of this intrigue and ratcheting tension (Gilroy successfully manages to endow toiletries with the same gravity as state secrets) is mere subtext for his true game—the relationship between Ray and Claire. Everything else is just the set-up. Here is where Gilroy focuses our attention and applies everything we've learned about the world in which Ray and Claire operate.

Ray and Claire are perfect for each other. They will never meet a more suitable match and both know it. But they also know that trust between them is impossible. Likewise, neither is willing to concede the slightest shred of vulnerability, including the most vulnerable statement of all: "I love you."

We glimpse the pair at every stage of their relationship: competitive adversaries, guarded lovers, conniving plotters, and finally empowered allies. But one thing is always constant: distrust. They never know when the other is being truthful. Every scene that the two share ends the same way. At some point, one of the suspicious lovers (usually Claire) tests the other's loyalty.

Conversations do not so much seek truth, as they seek to interrogate. And each time they come together it falls apart because their very lives are built on deceiving people.

There's definitely some chemistry between the two

We ask ourselves the same questions Ray and Claire ask of each other: do they not trust each other because of their line of work, or has their line of work made them inherently untrusting? The answer is important as it bears on every relationship they will ever enter into—especially this one.

This isn't the first time Roberts and Owen have wrestled with trust issues. When last they shared a screen in the difficult but significant Closer, they were part of a foursome of damaged souls looking for love but doomed to sexual betrayal. Their chemistry here is much lighter but every bit as palpable. They circle each other like sharks, albeit sharks clearly infatuated with each other. The electricity between them powers our enjoyment of the film. The romantic comedy is as much the crux of Duplicity as it is its ultimate means of misdirection, employed in such a way that we cannot help but think of earlier films like To Catch a Thief and The Thomas Crown Affair, even as Gilroy reappropriates their sophisticated repartee and transforms it into something darker and hence more modern. His dialogue, while not as fast or entendre-infused as '30s cinema, nonetheless crackles with screwball rhythm and humor.

Roberts, who has been largely absent from the screen of late, looks great. When she breaks into her famous ear to ear smile, she is every bit as lovely and effervescent as when we first discovered her in Pretty Woman. But she is also a far better actor than then, and she is allowed to be tough in this film, a woman of resolve and poise, given to glacial stares as much as open-faced smiles. Owen reminds us why we like him in the first place. Relegated lately to humorless, unkempt sadsacks, he looks dashing and debonair throughout Duplicity. There were times I imagined him in the Bond role many assumed had become his birthright.

Wilkinson and Giamatti, as the scheming titans of industry, are perfectly cast and are the vanguards of a stellar group of recognizable but not worn-out supporting players who include Denis O'Hare as Ray's boss Duke, Tom McCarthy as Claire's coworker, and Carrie Preston as a naïve travel employee Ray seduces for information.

Gilroy, who seems incapable of choosing a genre he can't write for (and now direct), has crafted an old-fashioned caper film, a mind game full of cinematic sleight of hand, clever writing, spirited direction and visual panache. Though his first two films, Michael Clayton and Duplicity, are both set in New York City (Duplicity also does a fair amount of glorious globe hopping) amidst the world of corporate business, the similarities end there. Tonally, Gilroy's freshman and sophomore efforts couldn't be more different. Rather than eviscerate corporate corruption, Duplicity decides to have fun at its expense.

The ending of Duplicity will leave you pleasantly stunned. It's not as if you didn't see some sort of twist coming, but it's not the twist you expect, which is the definition of a twist, no? As the credits role, you're left with one inescapable conclusion: there is always someone smarter than you.

Duplicity is rated PG-13 for language and some sexual content. The sex is relegated to non-explicit foreplay and a one brief flash of upper female nudity. One character sleeps with another in order to gain information. Sex is discussed repeatedly. The profanity is largely moderate.