Hollywood legend Jane Russell never intended the former reputation—indeed, she even fought it—but she was always serious about living her faith in Tinseltown.
By Peter T. ChattawayMarch 3, 2009

She was one of the most celebrated sex symbols of the 1940s—and she was also a born-again Christian who hosted Bible studies in her home.

Jane Russell was only 19 years old when she signed a seven-year contract with legendary movie mogul Howard Hughes, and she spent most of those seven years waiting for her first film to be released. The Outlaw was produced in 1941 and had a limited release in 1943, but it didn't play to a wide audience until 1946—largely because of a controversy over the way the film drew attention to Russell's figure.

Russell's second film, Young Widow, also came out in 1946, and after that, she stayed fairly busy on the big screen until the late 1950s, co-starring with the likes of Bob Hope (The Paleface), Roy Rogers (Son of Paleface) and Marilyn Monroe (Gentlemen Prefer Blondes) in movies that capitalized not only on her appearance, but on her tough-gal persona.

Russell, 87, hasn't acted in a movie since 1970, but she still grants interviews for documentaries and TV shows. Her latest appearance is in Hollywood on Fire, a documentary (released to DVD last week) about Christians working in the movie industry; for the most part, the film focuses on current professionals—Cory Edwards, Chuck Norris, Eric Close, and others—but Russell helps to keep the film rooted in Hollywood's past, as well.

She spoke to Christianity Today Movies by phone from her home in the Santa Maria Valley in California.

What sort of religious background did you have?

Jane Russell: I gave my heart to the Lord when I was five. And my mother, who had been a stage actress, became one of the best Bible teachers I ever heard. I had four brothers, and we heard a Bible story every day. Things happened later in my life where ...

Join in on Facebook
Tags:
None
Posted:
March 3, 2009
More From: By Peter T. Chattaway 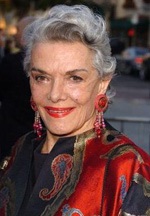