PBS documentary Jerusalem: Center of the World—which airs Wednesday, April 1—isn't a pilgrimage-on-film, but it's not a bad place to start.

The title is partly inspired by medieval European maps in which Africa, Asia, and Europe are shaped like three petals attached to the center, Jerusalem. Inside the Church of the Holy Sepulcher, a "compass" marks the center of the world. This film shows that the city is, rather than the geographic center of the world, a focal point of Christianity, Islam, and Judaism—which together account for more than half of the world's population. 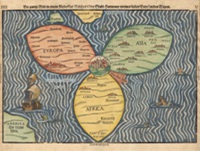 A map depicting Jerusalem in the middle

Ray Suarez, senior correspondent for The News Hour with Jim Lehrer, narrates Jerusalem's religious history as he pats the sides of Israel's ancient ruins and wades through a tunnel dug beneath the city during Hezekiah's reign. European paintings—many by Rembrandt—and Islamic illustrations fill in as Suarez and a colorful group of religion experts explain how Jerusalem became so important.

The film starts with Abraham leaving Ur at a time when Jerusalem was already settled by Canaanite tribes. The documentary embellishes biblical history, adding in traditions that say, for example, that Jerusalem is also where God created Adam.

Suarez goes into the details of the destruction and rebuildings of the Jewish Temple. Jesus' short life is given about 15 minutes of the two-hour run time. For viewers who know what happens up to 70 A.D.—and then nothing—it will fill in some big gaps.

The second half of the film explains how the city came to look as it does today, if you can keep up. Toward the end, the pace picks up as Suarez lists how "the world's most contested piece of real estate" changes hands among multiple Christian and Muslim rulers.

Christians, Muslims, Jews, and others fought, came, and went, sometimes leaving Jerusalem little more than a tourist trap. Mark Twain found it an unappealing, sleepy place when he visited. The Romans, after nearly wiping out the Jewish population, expelled the rest; Saladin's Muslims let them re-settle.

The documentary does go outside Jerusalem to Masada, the fortress Herod the Great built for himself. It was the last holdout of the Jews against the Romans. The 900 people inside killed their families, each other, and then themselves to avoid the consequences of capture by the Romans. Today, it is held up as an example of Jewish heroism.

Those who have visited the Holy Land will recognize the churches, the handprints to put your hand in, the long lines of tourists following the Via Dolorosa, and the Hasidim at the Western Wall. But the film documents no reminders of the economics of tourism; no one tries to sell Suarez laminated posters of Jerusalem when he's on the Mount of Olives. There are no shots of women silently praying in the closest tunnel wall to the former Holy of Holies or of ultra-Orthodox Jews in black Crocs. Suarez's walk through Hezekiah's tunnel doesn't involve the squealing youth groups who will be there for most pilgrims.

In fact, more than two million tourists—most of them arriving between March and October—came in 2008 to the places where Suarez walks alone. This may be the best view you'll ever get of the Dome of the Rock.

One of the most interesting interviews in the film is with a Muslim who holds the keys to the Church of the Holy Sepulchre. The church makes the news semiannually for the physical fights its multi-denominational priests get into. Here, doorkeeper Abed Judeh explains why his job is necessary and how the keys have been passed down in his family for generations. The film shows priests shutting the ancient doors from the inside as Judeh locks them for the night.

That's about as close as Suarez gets to the tense relationships in contemporary Jerusalem, although he does end by pointing out a plaque in the Garden Tomb asking visitors to pray for the peace of Jerusalem. The film clinically explains controversies such as Palestinian-Israeli relationships, even as missiles fly fewer than 70 miles from the city.

Nor does the documentary explore the complexity within each religion. Suarez, an Episcopalian, treats religion respectfully, exploring Jerusalem's complex religious relationships without favoring one group over another. Still, the documentary seems tone-deaf to some Christian themes; for example, there is no mention of Christ's divinity until after Suarez narrates the Crucifixion—odd, since the Gospels, the only source on Jesus' life, say Christ claimed divinity during his public ministry.

The Church of the Holy Sepulchre

Likewise, rather than depicting Abraham as a faithful man to whom God revealed himself, Rabbi Elie Weinstock characterizes him as a megachurch pastor who just figured out there must be a single Creator and "as a spiritual seeker, he was certainly up for a journey." The meaning of the Resurrection is reduced by another expert, Guy Massie, to "the faithful man is rewarded"—not exactly what Paul means when he says Jesus was vindicated by his Resurrection.

But if you're looking for history rather than theology, Jerusalem: Center of the World will be helpful. The documentary probably has some new information, even for those who've been to Jerusalem. It is worth watching for the pleasant, engaging way it untangles the relationships and history of David's city.

The film is not rated. There's nothing sexual or violent in the film, and it's appropriate for all ages—though young children would likely find it boring.