Why we've always found the Trek triumvirate of Kirk, Spock, and McCoy so, ahem, fascinating.
By Gary D. Robinson|May 5, 2009

As a new Star Trek movie hits theaters this week, one can't help but ask a simple question: Why?

The last ST movie, 2002's Nemesis, bombed at the box office. On TV, The Next Generation, Deep Space Nine, and Voyager all had successful runs (seven seasons each), but Enterprise limped along in the ratings until it was finally cancelled in 2005 after four seasons.

Kirk and Spock in the new film, opening this week

But the creaky franchise apparently isn't dead yet. So what keeps it going? Geek-love, for one thing. Then there's the love of money, the root of all kinds of reboots. But why, ultimately is Paramount pouring money into an—ahem—enterprise that has been losing steam (in ST lingo, "venting plasma") for so long? And why not push farther into the future? Why return to the original characters—those who inaugurated that storied and fabled "five-year mission"? Been there, done that, got the T-shirt at the Trekkie convention. Why not a whole new crew?

I think one reason is the power the original characters still possess. Trek was never so much about adventuring in outer space as it was exploring the space between our ears—and the space between each other. It was about ideas. It was also about relationships.

Roger Ebert realized that. To those who slammed the wooden Star Wars characters, he replied, "Hey, I've seen space operas that put their emphasis on human personalities and relationships. They're called 'Star Trek' movies."

A strange and wonderful relationship

The original crew, spearheaded by the triumvirate of Kirk, Spock, and McCoy, was anything but wooden. Theirs might not have been the most subtle performances, but they made viewers care. Theirs was a strange and wonderful relationship. On his own, each character was strong but, as a team, they were, to coin a phrase, fascinating. 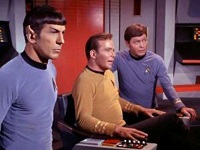 Spock, Kirk, and McCoy on the bridge

The trio worked on many levels. To begin with, these three provided a metaphor for Man himself. James Tiberius Kirk was the lion-like leader, stately and usually calm. Spock was his supremely rational, but somehow melancholy right-hand man. Then there was the volatile, emotional Doctor Leonard McCoy. Together, they functioned as a picture of tripartite man. In Freudian terms, one was Ego, one Super-ego, one Id.

In the 1982 movie, The Wrath of Khan, the three are in Kirk's quarters. They've just learned of the Genesis device, which has power both to create and to destroy life. Remember this clash between Id and Super-ego?

McCoy: Dear Lord, do you think we're intelligent enough to—suppose—what if this thing were used where life already exists?

Spock: It would destroy such life in favor of its new matrix.

McCoy: Its new matrix? Do you have any idea what you're saying?

Spock: I was not attempting to evaluate its moral implications, Doctor. As a matter of cosmic history, it has always been easier to destroy than to create.

McCoy: Not anymore. Now we can do both at the same time! According to myth, the earth was created in six days. Now watch out! Here comes Genesis. We'll do it for you in six minutes!

Spock: Really, Dr. McCoy. You must learn to govern your passions. They will be your undoing. Logic suggests …

Often, Kirk found himself mediating between the Apollonian logic of the Vulcan and the Dionysian reactions of the doctor. He himself seemed to be a mixture of the two, of wolf and lamb, able, for the most part, to sublimate his human passions into decisive but benign action.

In more Christian terms, McCoy might be seen as the flesh, Spock the spirit, and Kirk the Pauline 'I' (cf. Romans 7), the human being struggling to rise above his fallen nature. Kirk/Spock/McCoy struggled with himself at times, yet somehow remained a unit, as a man remains one person despite the vagaries of his nature.

'We band of brothers'

This trio also served as an inspiring example of camaraderie, particularly the friendship of men in battle. Leonard Nimoy (Spock) once described what appealed to him about the scenario in Shakespearean terms: "We few, we happy few, we band of brothers."

Film director Howard Hawks liked such bands. He leaned toward tales of men working together under pressure. His movies are diverse in genre and setting, ranging from the Andes Mountains (Only Angels Have Wings) to the snowbound wastes (The Thing) to the American west (Red River, Rio Bravo), but they all have a common theme:  buddies under fire. I'll bet Hawks enjoyed watching Trek on TV. 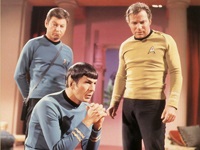 The three stuck together through everything

One fine example of the Kirk/Spock/McCoy common struggle was in the 1968 episode, "The Immunity Syndrome" (watch it here). When a giant amoeba threatens to absorb the galaxy, McCoy and Spock vie for the chance of piloting a shuttlecraft into it. The three men assemble for the captain's decision. Wearily, Kirk tells Mr. Spock he's sorry. "Bones" misunderstands, thinking he's got the job. Kirk corrects him: "I'm sorry, Mr. Spock. You're best qualified." The smile dies on the doctor's face. Yet, McCoy already has his hands full pumping stimulants into Kirk's bloodstream. "How long do you think you can keep taking this stuff," he growls. "It'll tear ya apart!" We smile. We know Kirk can handle it, just like we know that, eventually, the threesome will be reunited.

Another scene springs to mind: Spock has run amok on Vulcan and killed his captain. Watch him cry out in glee at the resurrection of Kirk. Caught with his pants down, Spock tries to save his dignity: "Merely my quite logical relief that Starfleet had not lost a highly proficient captain." "In a pig's eye!" replies McCoy. Kirk merely smiles.

One could go on and on reminiscing about these friends. Our friends.

That's how the king put it in Shakespeare's Henry V, a play a whole lot older than ST, yet constantly revived. There's a reason for its revival—and for Trek's. Whatever forms our struggles take, we look for and depend on brothers in the struggle. As a pastor, I know that sharing leadership with a band of brothers can get problematic, not to say frustrating at times. But I also know what it is to be alone at the top. It's not easy, nor is it good.

We were made for community: "It is not good for man to be alone" (Gen. 2:18). That goes not just for marriage or sexual completion, but also for friendship and camaraderie. Scripture doesn't stop there: True friends stick closer than brothers (Prov. 18:24), wound each other with the truth (Prov. 27:6), and sharpen each other like blades (Prov. 27:17). Jesus wept at the tomb of a friend. Paul loved his "fellow soldiers" in the faith. The bond of friendship is like a threefold cord that isn't easily broken (Eccl. 4:12).

Which brings us back to our trio. Their friendship was the impetus for a decade of re-runs, a plethora of conventions, and the great success of the early ST movies. In the end, it was about friends—friends that became our friends. As time went on, they got older, grayer, and fatter, but that only seemed to make them more endearing. We cheered them all the more lustily on a journey through time as well as space—a journey we took with them.

What will bring me—and I think many others—back into the theater for this reboot is that it's a chance to hang with our buds again. It's not so much that fans want to see a young Kirk or Spock or McCoy as they are seeing old friends again. Time and mortality won't have the final say.

I'm often asked, "Will we know one another in heaven?" The heart yearns for the continuity of community. In the new Star Trek movie, pop culture icons will once again resonate. They will speak to a deep need for renewal and rejuvenation. "Just like old times!"—that's the joyful cry of friendship renewed.

Ultimately, this is the reason Star Trek keeps coming back, because we want to come back—and boldly go. Together.

1 of 3
Kirk and Spock in the new film, opening this weekSpock, Kirk, and McCoy on the bridgeThe three stuck together through everything