A quirky romance between two unlikely lovers manages to be moving, despite an uneven story.
Lisa Ann Cockrel|May 15, 2009
Our Rating

Steve Zahn has played a panoply of doofus-y sidekicks in his career. He has a knack for it. And despite the fact that he's playing a romantic lead opposite Jennifer Aniston his latest flick, his character, Mike, appears to be pro forma Zahn character at first blush. But don't be deceived. Remember Rescue Dawn. By the end of Management, Mike has evolved from a man-child to a man capable of taking care of a child. And Zahn has shown the range and nuance that might just make him one of the most talented actors working in film today. Dude.

In Management, Mike lives in an Arizona motel that his parents own and he helps to manage. He's not exactly middle-aged, but he's old enough that the affectations of youth—sloppy clothes, an ever-present basketball, and junk food—are cringe-worthy at times. He has a wide-eyed, optimistic spirit that is tempered by the fact that he is, as his mother says, "stuck." Stuck at the motel, certainly. But also stuck in a more existential sense. And he is lonely.

Enter Sue (Jennifer Aniston). Sue sells "corporate" (read: crappy) art and stays at the family motel on a business trip, sleeping under a bland watercolor like those she peddles. And Mike makes a move, delivering a bottle of wine to her room, insisting it's a standard perk of staying at the Kingman Inn. It's hard to know whether to admire the guy's chutzpah or avert your eyes. I did both.

The first 20 minutes of the movie feels something like a kindler, gentler Todd Solondz creation. Which is to say we are given quirky people in a quirky place having quirky sex—in this case, the first tryst between Mike and Sue, an incredibly awkward groping scene in a hotel room … with all the romance, and small talk, of a brief ... 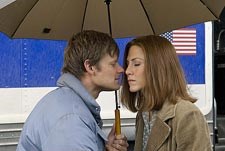