Jon Foreman and Switchfoot sing about the muck and mess of real life—and finding hope amid the darkness—on their new album, Hello Hurricane.
Collin Hansen|November 11, 2009

Since Switchfoot released Oh! Gravity in 2006, frontman Jon Foreman has won acclaim for his solo work and formed the new group Fiction Family with Nickel Creek's Sean Watkins. Meanwhile, Switchfoot built a new recording home, the Studio of the Foot, for their new independent label, lowercase people records. So is the band's new release, Hello Hurricane, back to basics, or did Switchfoot reinvent themselves amid all this change? Foreman sat down with Christianity Today and spoke about writing songs about finding hope amid hurt, theology, philosophy, and wearing the Christian label … or not.

What are some of the Big Things you're saying with the new album?

This record communicates hope. I've gone through really dark times, when I can't find hope to write about. This was the hardest record we've ever made, because we were pushing for something bigger than we already attained. A big part of that lyrically was trying to push through the clouds to find the hope that transcends the pain.

What can you tell us about those dark times?

The past four years of my life have been among the darkest times I've ever been through. To tell you more here would be giving a piece of myself that I feel less comfortable with. I'd rather sing it out. It's all in the songs. I'm incredibly fortunate to be able to hide behind lyrics!

With songs like "Red Eyes," "Sing It Out," "Mess of Me," and "Hello Hurricane," it's not the typical "positive and encouraging" CCM album, but you still say it's an album of hope. What is that hope? 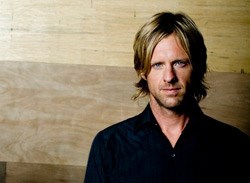