This based-on-a-true-story comedy about outlaw DJs is crazy for rock 'n' roll—and honest about its consequences.
Josh Hurst|November 17, 2009
Our Rating

If I were ever asked to make a list of my top five recordings of the classic rock era, I think The Who Sell Out would be a top contender. Released in 1967, the album is mostly an homage—and perhaps a bit of a parody—of the pirate radio stations that broadcast the hottest rock 'n' roll to a voracious, largely teenage audience. At that time, the BBC refused to play more than a half hour of popular music per day, and when the bureaucrats began campaigning to rid the airwaves of "immoral" music, a bunch of roguish DJs took to the seas and piped rock to the mainland from their bulky floating transmitters. It's this cheerfully renegade spirit that The Who Sell Out captures so well; smashing rock numbers are piled on one after another, linked by fake commercials and made-up jingles (at times, it's hard to tell where the songs end and the adverts begin) and united by a merrily impish sense of humor.

Richard Curtis' film Pirate Radio is set in 1966, just a year before that Who classic, and it captures much the same spirit. The movie is based on one of the actual pirate radio stations, and that odd period of rock history more generally; the vast majority of it takes place on the boat, the large cast of characters is primarily made up of DJs, and the film itself has a gloriously ramshackle feel to it. It's stuffed almost to overflowing with sly humor, a bit of bawdiness, a winning batch of characters, and of course, lots of rock 'n' roll.

And—crucially, perhaps—it is at once a tribute and a commentary. Curtis doesn't mind picking sides—the film is very much a celebration of the free-spiritedness of the cheery pranksters who rock the boat, while the government censors are stiff, unhip, and totally unlikable—but ... 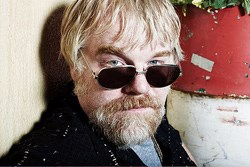