Rebecca St. James is best known as an award-winning musician, but her stage presence made her want to try acting some day. Now, in her first lead role in a feature film, St. James portrays a woman facing an unplanned pregnancy in Sarah's Choice (Pure Flix), recently released on DVD.

In the film, Sarah—unmarried, pregnant, disdainful of her religious upbringing, and seeking a job promotion—struggles whether or not to have an abortion. Her family, friend, and co-workers voice different opinions, but Sarah is most strongly affected by a mysterious woman and three visions of Sarah's life with a child.

In addition to Sarah's Choice, Pure Flix also recently releases In the Blink of An Eye and Birdie and Bogey. The Christian film company aims to provide "high quality redeeming movie entertainment … with a unified vision of being purpose and profit driven to change culture for good and for God."

St. James recently talked to CT about her career in the entertainment industry as well as the importance of films like Sarah's Choice.

What are some of the joys and challenges in acting?

I knew there were certain elements to music that would translate over into film, but I also knew it was a very, very different medium. So I went to an acting class for about six months before I filmed Sarah's Choice. The main things that translated over for me from music was what a friend said: "You've got to bring your own life experiences, your own heart to that set of circumstances playing another character."

The crying scene in the film was kind of challenging. But God really allowed me to bring my own pain from my life to the situation. When I watch that scene now, I cry because it's real. It's very fulfilling when you emotionally go there ... 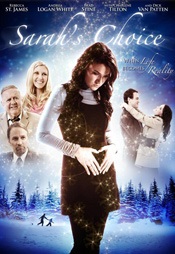