Many people see Red Cliff as Hong Kong actioneer John Woo's return to form. I'm not one of them. John Woo has never once made a film I've liked, though he has made at least one I've detested. For me, Red Cliff is not John Woo returning to form, but entirely redefining himself, transforming both his narrative and aesthetic style into something seldom even hinted at in his earlier work. Red Cliff is a visual masterpiece of both epic sweep and intimate detail. In ways both palpable and intangible, Red Cliff is like a mid-20th century Hollywood period spectacular—brimming with narrative optimism, thematic confidence and the courage of its three-dimensional characters. Sun Tzu had it right; indeed there is an art to war.

Red Cliff takes place in 208 A.D. and highlights a battle that heralded the end of the Han Dynasty's vice-like grip on mainland China. Power-hungry prime minister turned general Cao Cao (Zhang Fengyi) is the real power behind the impotent Han emperor Xian, a leader too young and terrified of his advisor to assert the crushing power his office bestows. Seeking to gobble up the southern provinces, the last holdouts against his geographical appetite, Cao Cao makes up a story of treasonous warlords and convinces the emperor that a military expedition must be launched at once.

Realizing that the full weight of the emperor's massive army is about to be brought to bear on their peaceful realm, the southern warlords, Lui Bei (You Yong) and Sun Quan (Chang Chen), unite to repel the invaders. Spearheading their resistance is Bei's military strategist, Zhuge Liang (Takeshi Kaneshiro), who has an intuitive understanding of warfare as well as a keen empathy with nature, and General Zhou Yu (Tony Leung), who commands a ... 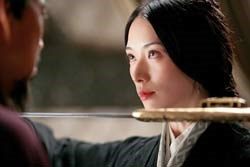