In a post-apocalyptic world, a band of sentient rag dolls must evade an onslaught of mechanical beasts out to steal their souls and any future for humankind.
Brandon Fibbs|September 9, 2009
Our Rating

I first saw Shane Acker's Oscar-nominated short film on which 9 is based at the Telluride Film Festival nearly five years ago. It was intriguing: dark yet captivating, dynamic yet baffling, oddly familiar yet undeniably surreal. The short always felt like part of a much larger whole, so it is no surprise that when visionary director Tim Burton ( Edward Scissorhands, Charlie and The Chocolate Factory) saw the film, he, together with Russian director Timur Bekmambetov (Wanted, Nightwatch), encouraged Acker to develop it into a feature-length film.

9 opens just after the end of the world. The dark and frightening landscape is one of rubble and half decomposed human corpses. Mighty war machines lay where they fell, apparatuses out of place even in a world of shattered buildings and apocalyptic desolation. Ravenous fires lick at any available fuel source, and an impenetrable shroud of pollutants and ash cloak the sky. Following an all-out human vs. machine war, neither side came away the victor. Reflecting a dictate of modern atomic theory, mutually assured destruction was imminent, and now the surface of the planet is a blight, wiped clean of any living human presence. A voiceover says, "Humanity had such promise. But we squandered our gifts."

A rag doll tumbles off a shelf and somehow comes to life; exactly how this happens, we're left to wonder. The doll, simply known as "9" (voiced by Elijah Wood), is alone in a battered lab. He's made of burlap and sealed by a zipper running the length of his middle. He's no larger than a child's action figure with blinking, apertured eyes—like camera shutters. To the newly alive 9, everything is new, mesmerizing and astonishing. Yet even he senses something is far from normal beyond the disintegrating walls of his birthplace. By chance, 9 finds a small community of others like himself—diminutive, sentient rag dolls—hiding in the sanctuary of a decimated church, and from them learns to evade a series of monstrous mechanical/animal hybrid wraiths intent on ingesting his and his fellow dolls' souls. (To reveal how they got their souls would be a spoiler.)

But when 9 learns that there may yet be hope to save those who have already fallen to the beasts, he convinces the others (including 5, voiced by John C. Reilly, and 7, by Jennifer Connelly) to go against the advice of their leader (1, voiced by Christopher Plummer) to leave well enough alone and go on the offensive against a menace that is growing in strength and size.

Confronted by the Fabrication Machine

9, the movie, contains a compelling subplot centered around the notion of questioning both the universe and authority. 9, the character, is relentlessly inquisitive, asking about his surroundings, his origins, the genesis of the machines, and how they might be destroyed. For a rag doll, 9 asks fundamentally human questions—Who am I? Why am I here? What is my purpose? He can plainly see he is the final model in a line of nine created beings—ostensibly in an attempt to save the human race—each more advanced than the last. By contrast, 1 is old and fearful and wants nothing more than to stay safely hidden away. He wants to keep all those he watches over ignorant of the truth. Naturally he and 9 clash. 1 considers the newcomer to be guided by nothing more than pointless queries. "Questioning," he says, "leads to catastrophe." But catastrophe has already come and gone.

The casting of Elijah Wood is certainly no accident. 9 is steeped in both the imagery and mythology of The Lord of the Rings, a detail made all the more interesting given the fact that director Acker once worked for Weta digital workshop, contributing to the visual effects in The Return of the King. Watching the tiny figures stumble across a blasted landscape toward a towering structure lit by a red, eye-like light source seems to be a reference to the arduous journey made by a pair of persistent hobbits.

It is far from the film's only homage. 9 also invokes The Wizard of Oz, borrowing the familiar refrain of "Somewhere Over the Rainbow" and twisting it to reflect a new, sickening reality—this is not a place where rosy cheeked little girls wake up from Technicolor dreams; this is a horrific, all-too-real nightmare in which all that made humanity unique and special hangs on, literally, by a thread.

5 (John C. Reilly) and 2 (Martin Landau) run from one of the beasts

Though the machines were once forged in massive factories, they are now forced to build each other from whatever materials they can scavenge, oftentimes taking on the ghastly appearance of crude, perverted life. The beasts in 9, cobbled together from mechanical scraps, organic remains and found items, are genuinely terrifying. They take the form of prowling cats, complete with sun-bleached skulls; slithering snakes with great hoods hiding cracked doll heads; a pterosaur-like fiend with wings of leather and a scorpion tail; and, of course, spiders. They remind us of the cephalopod-like sentinels in The Matrix. (Evoking 1 Peter 5:8, the beasts can also be seen as metaphors for another beast who prowls around seeking souls he may devour.)

This is not a film for children. The monstrous images and violence, while cartoonish, is far too frightening for all but the oldest children. Whereas Coraline, another splendid animated film from earlier this year, sought to be scary within limits for kids, 9 includes scenes far too terrifying for most young minds.

9 leaves us with numerous unanswered questions. Why make miniature rag dolls in an attempt to save the human race? Who built the first mechanical beast and why? Why is the enemy machine's brain intent on claiming souls, and how does he do it? Some will see the lack of explanation and back story as appropriately ambiguous, while others may simply find it vexing.

The end of 9, which occurs far too quickly, engages in a bit too much hocus-pocus—a disappointing deus ex machina dénouement. After setting up a world of gears and levers and pulleys, suddenly introducing supernatural elements feels like a magical cheat, an unnecessarily and unwelcome metaphysical bow with which to tie up the storyline. We can see that the film is trying to draw a very clear and wide swath between humanity and machine, but it takes it a step too far. 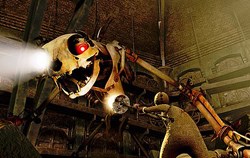 9 seems to say that technology employed without the application of a human soul is easily corrupted—not a new concept, but a valid one. But even this statement grinds against what we are shown—a barbaric humanity that first builds the war machines to decimate their very human enemies. Only later do the machines turn on their masters. Obviously humanity is far from pure and perfect, despite the fact that the end of the film insists that it is the human soul alone that has the integrity to survive and thrive long after humanity itself is ash. But we know better. Machines weren't the problem. Neither was the so-called dark science that enabled their creation. We were. "We have the power to make [the future] however we want it," is the film's closing line. But it is warped and cracked, this image of humanity upon which they plan to remake the world. And history has a devastating way of repeating itself.

Through it all, 9's visuals are magnificent, its animation breathtaking. It's all done on computers, but it has a stylized look that resembles stop motion. Animation is one of the greatest cinematic mediums because it is constrained by nothing but the imagination of its creators. While many have bought into the fallacy that "cartoons" are for kids, many others understand that animation is an unbounded dream world, unfettered by the constraints of physics and the laws of the rational universe. 9 is an enthralling and beguiling step in that direction, a flawed but gripping narrative suffused with wonder, imagination and dread-tinged awe.

9 is rated PG-13 for violence and scary images. While there is no sex or language, the frightening imagery is pervasive. Since the characters are rag dolls and not human, their deaths are bloodless, but the mechanical beasts which dispatch them are terrifying. This is not a film for young children. (Additionally, there is a scene with a magnet that could be construed as a metaphor for drug use, but will pass right by most viewers.)

1 of 4
9, voiced by Elijah WoodConfronted by the Fabrication Machine5 (John C. Reilly) and 2 (Martin Landau) run from one of the beastsBattling the Cat Beast